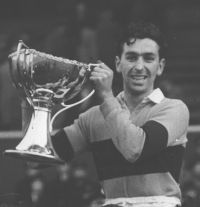 The Supporters Association presented the first Player of the Year award in April 1956 when Andy Paton received a silver cup from Sailor Hunter at a dinner dance in Overton Miners Welfare.

The great man was further honoured in 2007 when he was declared the "Greatest Ever" Motherwell player. He served the club for 16 years, collected both domestic cups, a Second Division title and 3 Scotland caps.