When Motherwell fans sat down to watch the Scottish Cup 3rd round draw being made in early January 1991 I think it's safe to assume most didn't have a clue what would follow.

My own thoughts were that as long as we avoided a trip to Ibrox or Pittodrie I'd be happy. As it happened, we avoided Rangers but when my dad told me on the Sunday morning (I wasn't allowed to stay up that late to see the draw) we were away to Aberdeen I was strangely pleased.

I think I must have come to the conclusion that since we weren't going to win the thing I might as well get to visit a new ground on the way to our demise. Pittodrie had always been deemed to far away for a league match (it was a good three and a half hour drive back then) but the cup was a different matter.

And so on the morning of the 26th of January 1991, three generations of Motherwell supporters set off on the long journey to Aberdeen. Little did we know that the Scottish Cup would be our greatest journey in forty years, full of agony and ecstasy and more twists than is safe for a human heart to take. It gives me great pleasure to review the whole cup run. I hope the memories are as good for you as they are for me. 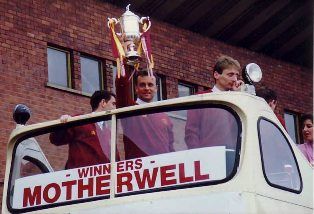