An added time goal robs 'Well of a point

A brave Motherwell effort at Ibrox was not enough to take anything but pride as Rangers won the game 2-1. McDonald gave us an early lead but we conceded two in the second half.

Although we started with an unchanged team the attitude and energy shown was quite different from last week. Right from the kick-off we pushed forward and made it clear that our hosts would not have an easy afternoon.

Johnson and McDonald had the first attempts on goal as the game settled down. Rangers soon had a spell of possession forcing Heneghan and McManus to clear crosses into our box. 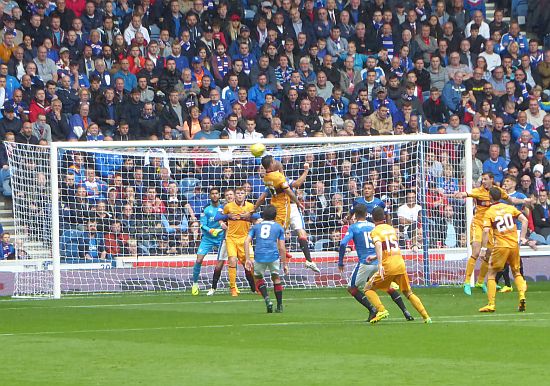 Johnson snatched an effort from the edge of the area but soon a slack back pass from Ainsworth gave Miller a chance. He shot high with the target open.

Ainsworh was on hand to collect a knock down from McDonald but his rushed shot caused Foderingham no problem. Better was to follow in 18 minutes when Johnson cut in from the left to fire low across goal. McDonald was able to pounce on a deflection from close range to give us the lead.

We followed that up by missing a couple of half chances and had to concentrate on defence for a long spell before the break. Still, the first save Samson had to make ws a deflection in the 44th minute.

The second half was a one-side affair. Rangers started fast and kept up the pressure for the rest of the game. We had two chances during the torrid 45 minutes. First, McDonald had a fierce effort from the angle of the six yard box that had Foderingham in the air for a fine save and later Johnson delivered a powerful 25 yard rocket on target.

Rangers made a double substitution ten mnutes into the half in an attempt to break though. Dodoo and Krajcar replaced McKay and Halliday.

We were forced into last ditch defending time after time but after an hour Forrester latched on to a loose ball after Samson had blocked Miller's close range effort. He didn't miss and the game was level.

The pattern remained fairly constant. They attacked, we held on and made the occasional break up the park. The fourth official indicated three additional minutes and it looked like we might come away wih a point but Millier found space 8 yards out and scored.