Moult the Pride of Lanarkshire

An outstanding four goals from Louis Moult set up a 4-2 victory for Motherwell over Hamilton to ensure bragging rights for the Fir Park faithful.  The visitors refused to crumble but there was no doubt that the better team won.

Motherwell overpowered Hamilton with an early blitz and topped it off with Moult’s quick-fire hat-trick that had us three up after 20 minutes.  We conceded before the break and the game changed.  Both teams scored one in the second period and the three points were secured.

Although our number nine will hit the headlines with his four goal spree he will be quick to acknowledge the contribution of his colleagues.  Bowman partnered him up front as McDonald took up station wide on the left.  Cadden impressed again with his strong running from midfield and his deliveries from the right with posed endless problems for the Accies’ defence. 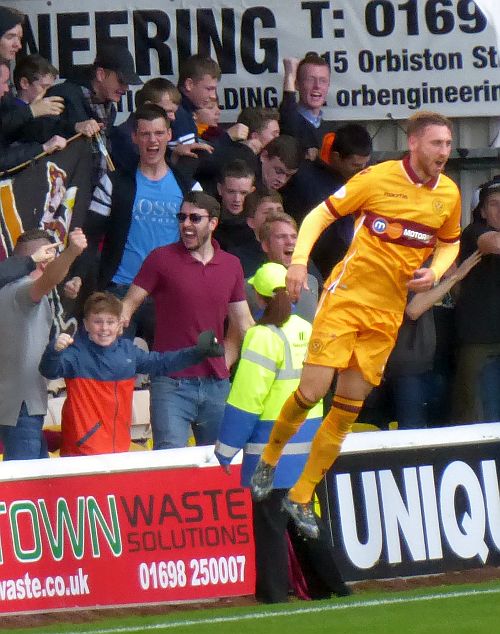 Bowman set up Moult for the first goal using his physical presence to deliver the chance.  A shot under the ‘keeper opened the account after 8 minutes.  A back post header four minutes later converted Tait’s cross as Accies’ defence struggled to cope with our onslaught.

Crawford might have scored a hat-trick of his own for Hamilton.  He scored two and was unlucky on a couple of occasions.  He blew a chance to make the score 2-1 when he shot over the bar from close range and when a Moult rocket from 15 yards raised the roof in the home stands it looked as though the game was over as a contest.

The 500 fans in the South stand were offered hope 10 mintes before the break when slack defending from Tait gave Accies a chance.  Crawford finished well with a curling effort from the edge of the box, enough to raise a few doubts about the outcome of the game.  A wonderful free kick from the Hamilton man then struck the post much to the relief of the home support.

Five minutes into the second half our three goal lead was restored when Bowman was tumbled in the box.  Moult made no mistake and we were 4-1 up.  The goal hero received a standing ovation when he came off after an hour.

Crawford got his second, another fine strike, but despite several scary moments we were happy to see the match finish without further scoring.

The win propelled us up the table to fifth place and we can look forward to a visit to Firhill next week.