In front of over 10,000 fans at Fir Park Motherwell set about overcoming the two goal advantage that Katowice had earned in the first leg.  Claret and amber fill all four sides of the park as no travelling fans had made the journey.

Our first goal in European competition came after half an hour and offered some hope.  Stevie Kirk got his name in the record books (not for the first time) with his header at the second attempt from a Cooper corner. 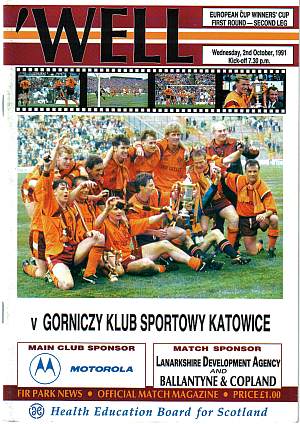 We piled the pressure on and came close on a couple of occasions, the best chance falling to McCart but he missed the target from Dolan’s cross.  There was no change by half time.  Kirk fired high from six yards early in the second period and we kept pressing but the visitors were to find the net next. 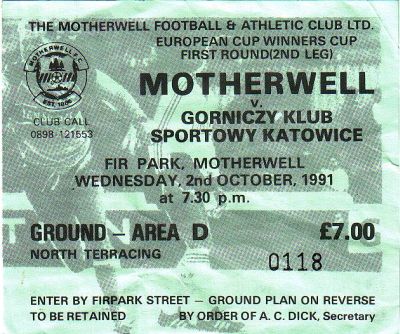 McCart suffered a head knock and had to be replaced by Philliben.  Before we had time to settle Rzezniczeck had slipped one beyond Thomson and were again two behind in the tie but Katowice had what was to be the crucial away goal.

The clock was against us when Cusack headed home, there were only five minutes remaining.  We were in injury time when Kirk popped up to prod a short effort into the net for a final consolation.  There was no time left for a tie winner and despite a 3-1 victory we lost out on the away goal rule.