From Iceland to Norway in a week!  The club had little time to finalise the details for our trip to Ålesund but we were favourites and the chance of a glamour tie awaited the winner.

Aalesunds FK had qualified for the Europa League by winning the Norwegian Cup in 2009 and were fourth in their league at the end of July.  They were novices in european competition but Motherwell were hardly in a position to take them lightly.

Shortage of time combined with a tortuous journey restricted the number of travelling fans.  Expensive seats were made available on the club charter and they were joined by a number who took a route via Copenhagen and Oslo.  The stay at home fans were to have a frustrated evening as they had to follow the game via text updates.  None of our domestic broadcasters saw fit to cover the game on TV or radio. 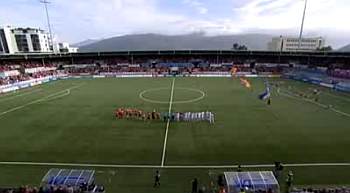 We fielded an unchanged eleven for this 3rd Qualifying Round match and used the same defensive formation.  Craig Brown had stressed the importance of scoring an away goal and his plan was to use pace to secure a goal on the break.

Despite early pressure from our hosts that included a rocket against the bar,  we reached the break without loss.  The crowd got behind the home team though our small band made themselves known.  Motherwell thanked those who made the journeys to Iceland and Norway a few months later by entertaining them for an evening at Fir Park.

Jamie Murphy’s moment arrived early in the second half.  He produced a fine turn and strike low into the net from ten yards.  Hateley’s good work on the right produced a driving cross into the danger area and Humphrey became provider when it fell to him at the byline.

It seemed that we would return with a tremendous one goal advantage but Saunders was penalised in added time and a penalty was awarded.  Matheson sent Randolph the wrong way as the young defender held his head in his hands.  Still, a score draw was most acceptable and we were able to prepare for the home leg with some confidence.