Motherwell's fifth place finish in the SPL was enough to earn a third consecutive entry to European competition at the start of season 2010/11.  In June we were paired with Breidablik from Iceland in the 2nd qualifying round of the Europa League.

The first leg took place at Fir Park in 15 July in front of 6,000 fans and a goal from Ross Forbes separated the teams.  There was some concern before the match that we might struggle to match the fitness level that our opponents had reached.  They were midway through their campaign and at the top of the Icelandic league while this game was to be our first competitive match. 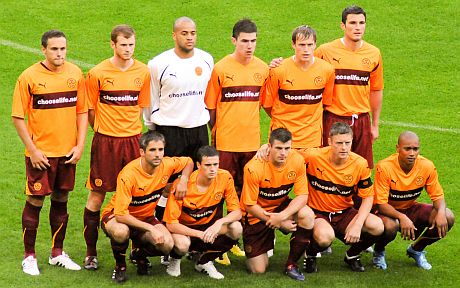 The game was also notable as it was Craig Brown’s first club tie in European competition.  The contest should have been sewn up by the interval but we couldn’t score with any of the many chances.  Forbes’ goal came after the hour when a cross floated into the net.  We had survived a few scares but the 1-0 result, from a half paced performance, suggested that we were likely to be too strong for Breidablik.

There was no TV coverage of the game and only a domestic broadcast from Radio Scotland to allow those unable to attend to keep up with the game.  The game took place just before the start of the Fair holiday fortnight and many regulars were to be frustrated as they tried to follow the happenings at Fir Park.