Motherwell's first foray into the Champions League paired us with Panathinaikos.  There was huge anticipation for the first leg which took place at Fir Park at the end of July.

Our qualification came the demise of Rangers and our third placed finish in season 2011/12 meant that we entered the tournament at the 3rd qualyfying round.  We were unseeded and were always going to be second favourites to progress to the financial jackpot that would have followed in the round ahead of the group stage.

Ahead of the draw we knew that our opponents would be one of Dynamo Kiev, Panathinaikos, FC Copenhagen and Fenerbahce.  The news that a trip to accessible Athens was ahead meant that a decent number of fans could start planning the away leg. 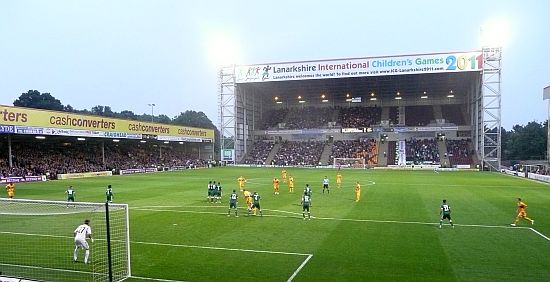 The club argued that financial uncertainty over the summer months justified a £30 entry charge.  There was no domestic broadcast of the either leg on television and Fir Park was buzzing with just over 9,000 fans in the stands.

We held our own into the second half but then lost goals from a free kick and a breakaway and our faint hopes all but disappeared.

Nevertheless, the chance of a trip to Athens was too good to miss and around 500 of the claret and amber faithful set off in hope of a miracle.