A First Cap for Declan Gallagher

Congratulations to Declan Gallagher for the winning start to his international career.  The Motherwell centre back earned his first cap in Cyprus as Scotland won the Euro qualifier 2-1.

Gallagher wore the number five shirt throughout the meeting in Nicosia.  Our man can be pleased with his contribution as the Scottish defence conceded only one goal thanks to a fine volley from the edge of the box.  Unfortunately it was his headed clearance that set up Efrem for the early second half equaliser but his dominance in the air at both ends of the pitch was a significant factor in the victory.  The win puts Scotland third in group table. 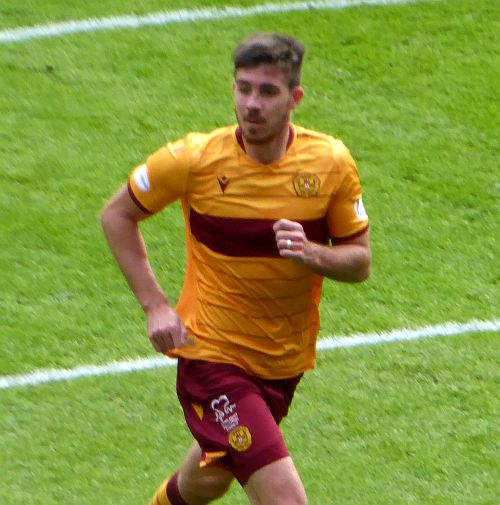 Steve Clarke will have an opportunity to give Declan another appearance for the national side when Kazakhstan come to Hampden on Tuesday evening.

Since joining Motherwell in the summer Gallagher has become a firm favourite in the Fir Park stands.  His contribution in both defence and attack has helped push his team into the top half of the league table.  It seemed inevitable that his consistent performances would come to the attention of the national team manager.

His appearance on Saturday was his first at any level for Scotland.  Let's hope it was the first of many.