After Killie, before Livi

The Motherwell squad will have no time to reflect on their success following the first cycle of Premiership fixtures as attention turns to the visit of Livingston on Saturday.

Wednesday’s win against Kilmarnock could have been more comfortable given the number of goal scoring chances that were created.  There is no doubt that the game was influenced by the early red card but there is little point in pursuing a ‘what if’ scenario. 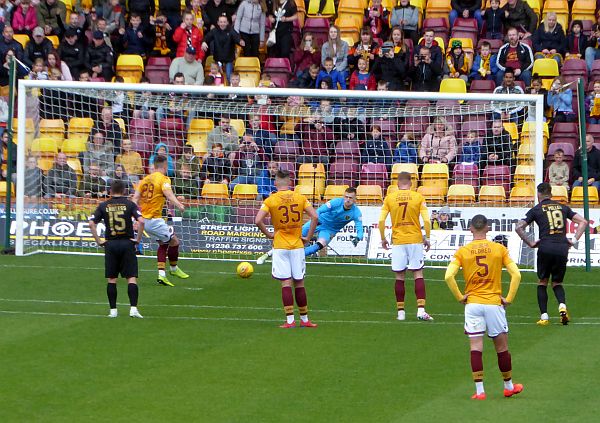 Stephen Robinson set out his stall with attack in mind and for long periods the game was played in front of the Kilmarnock goal. The manager in his post-match interview  was in no doubt that the win was deserved.  He felt that Chris Long had an outstanding game and praised Mark Gillespie for a fine late save.   “We’re third. We’re really happy with it. But I still think we can be better.”

While we took three points on Wednesday, Livingston managed only a draw at Easter Road despite enjoying a two goal lead with an hour on the clock.  Gary Holt’s team are now in sixth place in the table (six points behind us), a remarkable achievement given that they have won only one of their last seven fixtures.

Aymen Souda will be missing from the Livi forward line as he serves a suspension following a red card last week but we can expect to see our former player Steven Lawless in action.  He has five goals to his credit this season.

We opened this campaign with a goalless draw on the rubber pitch at Almondvale but we will surely find more comfort on the pristine grass at Fir Park.

Team selection could be unchanged on Saturday and we can expect to face an opposition with defence in mind.  So long as our back four remain alert to the breakaway threat we should be looking for a clean sheet.  The striking duo could get a goal each in a 2-0 win.