The build up to the Betfred Cup final is underway.  Tickets are selling well, the club shop has updated its stock and distant fans have made their travel plans.  All that remains is for the team to turn up and beat Celtic at Hampden.

It is fair to say that that majority opinion is not in favour of a Motherwell win but we have overcome the odds before.  The Steelmen have taken possession of the League Cup trophy only once, in October 1950, and that occasion surprised many. 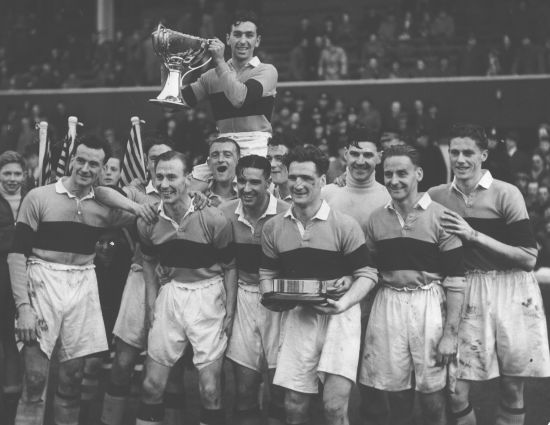 More than 64,000 saw Motherwell claim their first post-war trophy when Kelly, Forrest and Watters scored late goals to beat Hibs 3-0.  The Scotsman put the triumph in context with this opening paragraph,

“Motherwell’s 3-0 victory over Hibernians in the Scottich League Cup final at Hampden Park on Saturday wil rank as one of the season’s greatest surprises, for few anticipated that the Lanarkshire team could turn the tables so effectively, having in mind what happened only a fortnight ago when they surrendered six goals at home to the Easter Road side.  It was an inspired spell in the last quarter of an hour, after Hibs had produced the better football, but without getting any reward, that gave Motherwell their first major soccer trophy.  They were worthy winners.”

The Hibs team of that era was outstanding.  Led by the famous five of Smith, Johnstone, Reilly Turnbull and Ormond they won the league championship in 1948, 1951 and 1952 but with Andy Paton in great form in the centre of defence Motherwell kept their goal intact.

Kelly opened the scoring when he headed Younger’s parry into the net.  Forrest headed the second three minutes later and Watters ended the contest with a lob.

The trophy was paraded at Motherwell Cross and the team was honoured by the civic dignitaries.