Motherwell left Celtic Park on Sunday with heads held high but without any reward for the stubborn resistance they showed against the league leaders.  The international break will offer some welcome rest and recovery.

While expressing his disappointment with the result as he spoke to MFC TV after the game, Stephen Robinson talked of the unfortunate nature of the goals we conceded.  The first came following Declan Gallagher’s interception that offered Odsonne Edouard a twelve yard shot and the second was the unfortunate own goal by Richard Tait. 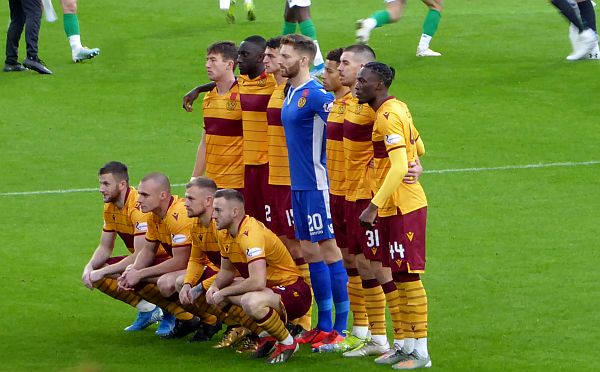 “To lose the two goals we concede is disappointing but there were a lot of positives and a lot of real good performances. Our build up play from the back to the middle third was very good although we could have had more of a penetrating edge in the final third.

“The boys did exactly what we wanted them to do.  We had two up front, we tried to hit them on the break.  At times we could have passed it a little bit better but it’s hard to be critical, they gave me absolutely everything.

The loss of top scorer Liam Donnelly to suspension and the short notice call off of Peter Hartley meant a start for Barry Maguire and central midfield slot for Richard Tait.  We even caught a glimpse of Casper Sloth on the bench!

The Premiership will resume on 23 November with a trip to Easter Road as the opener to a frantic end of year schedule.  Eight league fixtures are to be squeezed into a five week period that culminates with Hamilton’s visit to Fir Park on 29 December.

Declan Gallagher, Allan Campbell, Barry Maguire, James Scott Trevor Carson and Liam Donnelly are all away on international duty and we wish them well.