Celtic snatch a point after a late dodgy penalty

Motherwell came within a couple of minutes of ending Celtic’s unbeaten run until Willie Collum intervened to award the softest of soft penalties two minutes from time.  We had to settle for a point after a 1-1 draw.

The home crowd played its part by repeated chants of ‘Kipré, Kipré’ throughout the game and when bogey man Sinclair made a second half appearance he was loudly booed at every touch. 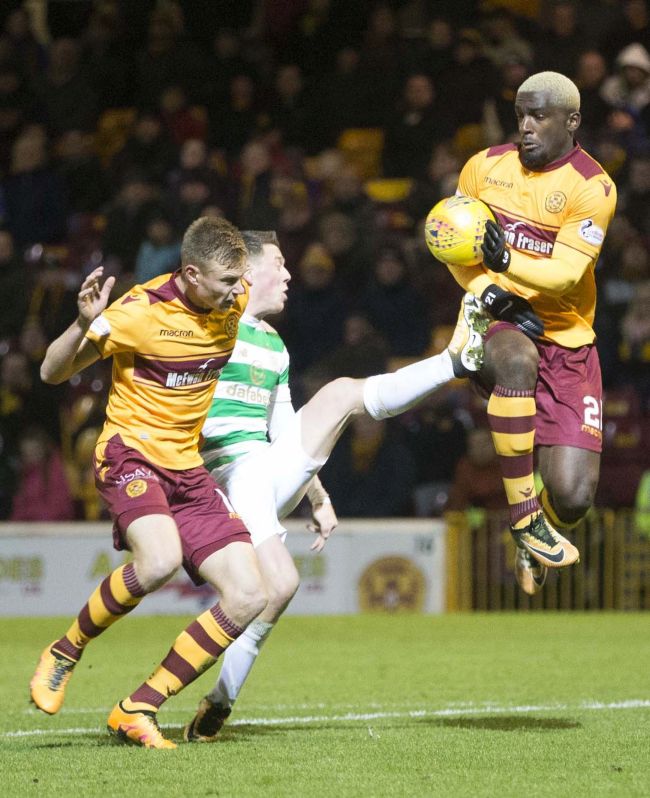 Helped by a sterling defensive performance with Carson outstanding we took the lead after Lustig sent Tanner’s free kick into his own net.  A frantic ten minutes followed but our celebrations were cut short when Rose was harshly judged as McGregor went to ground.

The manager elected to make three changes from the Hampden eleven with Grimshaw, Bowman and Rose making way for Petravicius, Campbell and Frear.

There was not much in the way of goalmouth action in the first period.  Roberts broke down early on and had to be subbed.  Rogic tested Carson before Armstrong took out Cadden; he was fortunate not to be booked – five Motherwell players were awarded yellows later.

Celtic had the best chance of the half in added time.  Tierney ended a nice move clear of everyone but Carson.  From 8 yards it seemed he must score but the ‘kepper got a hand to the ball causing it to strike the turf before it bounced over the bar.

Petravicius had not had much involvement and it was no surprise to discover Rose in his place as the second half began.  We continued to press the opposition and defend in depth as needed. Carson produced a few more decent saves before Moult tried for a spectacular at in front of the Cooper Stand.

Tanner replaced Frear and almost scored inside a minute.  Tait delivered a great cross but the glancing header flew well wide of the post.  But Tanner had his moment of glory with 12 minutes remaining.  He floated in a free kick from 35 yards and Lustig stuck out a leg to clear.  To our delight the ball flew past Gordon and into the net.  Could we hold on for the win?

With a couple of minutes left Carson produced more excellent goalkeeping but the ball broke to his right and, with no immediate goal threat Rose attended to McGregor.  The penalty was dispatched by Sinclair and we were robbed of a couple of points.