Three weeks have passed since Motherwell ended the successful 2021/22 season.  Here’s a round up.

Within hours of the last action at Fir Park (the win over Hearts that guaranteed a place in the Europa Conference League) a major reconstruction of the pitch began.  This huge investment in the playing surface should produce dividends for years to come.  The famous slope in front of the South Stand will be reduced, drainage will be improved and annual maintenance costs lowered.  @Alan_Burrows has kept fans updated with progress on his twitter feed. 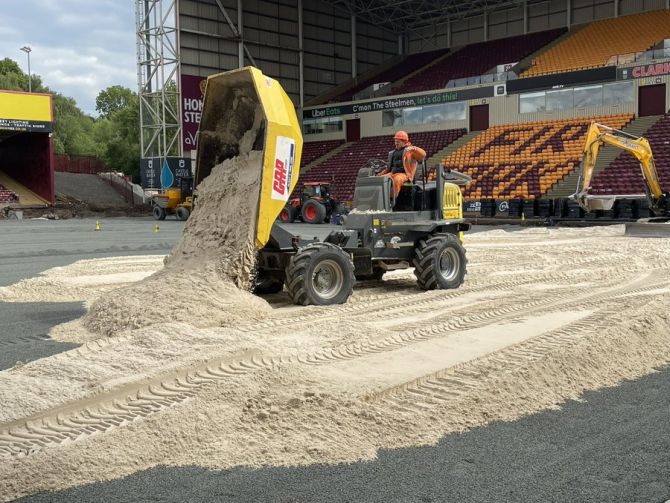 Thanks to camaraman Burrows for the photo

Ten players left the club as contracts ended but Ricki Lamie elected to stay in claret and amber as he used the opt out clause in his pre-contract agreement with relegated Dundee.   Blair Spittal was unveiled as the first addition to Graham Alexander’s squad after his spell at Ross County ended.

While most of the players took off to beaches far and wide Liam Kelly, Stephen O’Donnell and Bevis Mugabi had to postpone their summer breaks to fulfil international duties.  Bevis featured in Uganda’s 2-0 defeat against Algeria in the first round of the Africa Cup of Nations qualification group.

Season tickets for the new season are on sale and the early bird discount closes on June 17.  The reward for this commitment is superb value for money.

Motherwell fans hoping to join the team in their European adventure will be able to make plans at the end of next week.  The Conference draw will take place on Wednesday 15 June two days ahead of the SPFL fixture list reveal on Friday 17 June.

While the majority of clubs begin the sectional stage of the League cup Motherwell will end their preparatory week in Austria before sharpening up for the Euro ties on 21/28 July.  The league kicks off on the last weekend in the month July 30/31.