Sammy died in Wishaw at the weekend, aged 75.  Although his time at Motherwell was relatively short (he made his debut in the Ne’erday game against Airdrie in 1958 before leaving for Liverpool in 1960) he was an important part of one of the best forward lines of the post-war era. 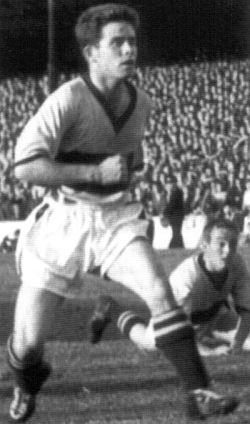 He was a short (5’4”) and clever inside forward and he fitted perfectly into the wonderful attacking line up that read Hunter, Reid, St John, Quinn and Weir.  He had followed his brother, Billy, to the club and made over 60 appearances in claret and amber.

He played in the 7-0 thumping of Leeds in one of the floodlit friendlies in October 1958 and in three of the four victories over Rangers in season 1958/9 only missing out on the full set as he was transferred to Liverpool in February 1960.

That move was Bill Shankly’s first signing for the Merseyside club and given the great manager’s eye for a player it is a fitting recognition of Sammy’s talent.  Motherwell received a fee of £8,000.

Sammy also played a part in the later transfer of Ian St John to Anfield.  There’s interesting interview with Sammy on the Liverpool website that explains why the move did not fulfil the promise many expected.  He moved to Falkirk then to Berwick Rangers via Clyde.

It was with Berwick that he claimed most recognition when he scored the famous goal in 1967 that knocked Glasgow Rangers out of the Scottish cup.

But for those of us with long memories it was the sight of him teasing all-comers in his Motherwell colours as part of a superb team that entertained all who had the privilege of watching them.