Motherwell enjoyed a comfortable win in Stirling in the first of four warm-up matches. Tuton and Bowman scored while Griffiths enjoyed a clean sheet.

A typical pre-season game unfolded with plenty of shouting between the players and few solid tackles. It really was a game of two halves with Robinson choosing different teams in each section.

Stirling kicked off on the perfect Forthbank surface against a Motherwell team resplendent in the new home strip. We had trialists at either end of the team, the large frame of Kipre shared the central defensive zone with McManus while Tuton led the line in attack. 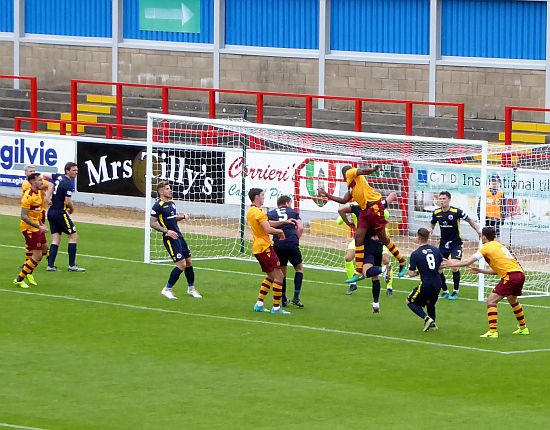 A typical pre-season game unfolded with plenty of shouting between the players and few solid tackles.

The home side were a match for their Premiership opponents in the early stages and they had two great chances to open the scoring. Both fell to McDonald but on each ocasion the striker failed to hit the target. Our trialist Shaun Tuton did not make that mistake when he collected the ball form MacLean in space just outside the box. He launched a right-footed thunderbolt in to Binnie's to right corner and gave his prospects of a contract a boost.

There was no involvement from Moult, Fisher, Bigirimana or Carson. The suggestion is that they will appear at Livingston.

Our new club captain kicked off the second half. He was one of the ten changes, Griffiths was the only survivor from the first period.

Dembele partnered Heneghan at the back and the tall Frenchman showed some attacking flair when he headed Cadden's corner against the post. It looks like the manager will have a difficult choice to make as he seeks another defender.

With an hour on the clock we scored the second. Cadden whipped n a low cross from the right and Bowman was on hand to deliver a clinical finish from six yards. He should have added anothe five minutes later when he controlled the ball on his chest and was rewarded with a shot on goal. He fired high.

The second team was better than the first!