Before kick-off Motherwell might have viewed a draw as two points dropped but by 5 o’clock we had overtaken Aberdeen and returned to third place.

An indication of the poor challenge being offered by those chasing Stephen Robinson’s team is that the results of the last six league games (DLLDLD) have been enough to retain the best of the rest spot.  If his side can regain some of the form that elevated them in the first half of the season they should be assured of a wee European jaunt. 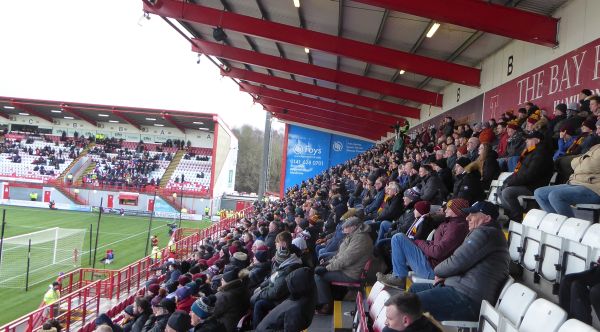 The opening half hour of Saturday’s contest gave no indication of a likely winner.  Play moved from end to end on and high above the wind-blown artificial pitch with Mark Gillespie’s early save thwarting the only goal scoring chance.

Chris Long can have no complaint at his dismissal.  A silly first caution for kicking the ball away deep in the Hamilton half was compounded when his rash challenge on Templeton prompted a second yellow five minutes later.

Hamilton grabbed the advantage and only stout defending led us to the interval without loss.  The manager is due credit for the change of shape that emerged in the second half.  Tony Watt and Rolando Aarons were retained in a two up attack as the defence switched from three to four.

The ten men coped admirably and the second period was more even than expected.  Indeed as the game entered the four additional minutes there were chances for Liam Polworth and Jermaine Hylton that would have lifted the roof off of the away stand.

News of Aberdeen’s defeat and the draw between Hibs and Livingston cast the single point in a different light.  Our positioned had strengthened.  A win against St Mirren on Tuesday will give us a four point gap.

A Point in Hamilton Returns Motherwell to Third