Cédric Kipré has left Motherwell to join Wigan Athletic in the English Championship.  All 'Well fans wish him every success and thank him for his contribution to our marvellous 2017/18 season.

The 6'3" Frenchman soon established himself as a mainstay of our defence and was an instant hit with the support. He will be missed but his departure would come as no surprise to Stephen Robinson and we can be confident that a replacement is already in mind. 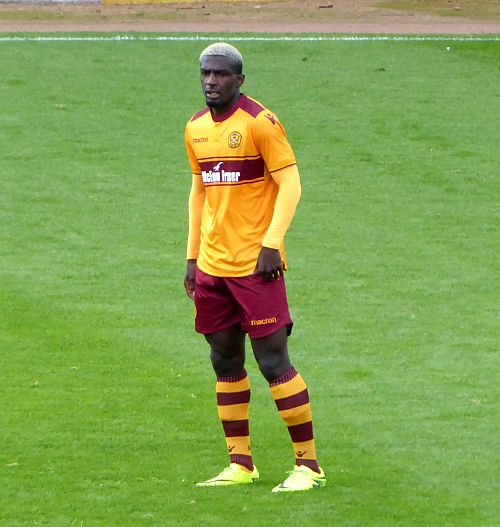 His progress has been dramatic and his move must represent the best piece of business in Motherwell's transfer history.

He first appeared in claret and amber last July when he played as a trialist for45 minutes in our first pre-season friendly against Stirling Albion.  He was offered a short term contract and played his first professional game at Hampden when we faced Queen's Park in the League Cup.  It was to be the first of an amazing five appearances at the National Stadium as he helped us to both knockout finals.

It did not take long before chants of Kipré, Kipré echoed for the Fir Park stands and he seemed genuinely delighted.  Indeed in his farewell tweet to the fans he said,

"Thank you to the fans who sang my name all season. it was amazing to hear that on the pitch and helped me kick on.  I'll never forget my time at Motherwell.  I wish you all the very best for the season."

As his potential became clear his contract was extended as the club protected its asset.  The transfer fee involves a lump sum (£750k?) with additions that may stretch the total close to a million.  Given that there was no outlay for him and that we had excellent service for a season his sale for close to a seven figure sum represents superb business.  We have earned a huge return for an investment in the scouting system.

Although we now have a gap in central defence ahead of Sunday's league opener there remains plenty of time to sign a replacement before the window closes at the end of August.  The test will be to repeat the trick!

All the best Cédric.