Lots of smiles in Lanarkshire

There may be more than a few sore heads in Lanarkshire in the aftermath of a night of celebration.  Motherwell’s many owners have had few opportunities to rejoice in recent seasons but under the proud banner, IT’S OUR CLUB, we will make the best of this occasion.

Motherwell rarely leave Hampden on the winning side and a knockout over Rangers is an event that has not happened in over fifty years.  Add that to the impressive early league form and the increasing bond between the club and fans and we have a happy mix. 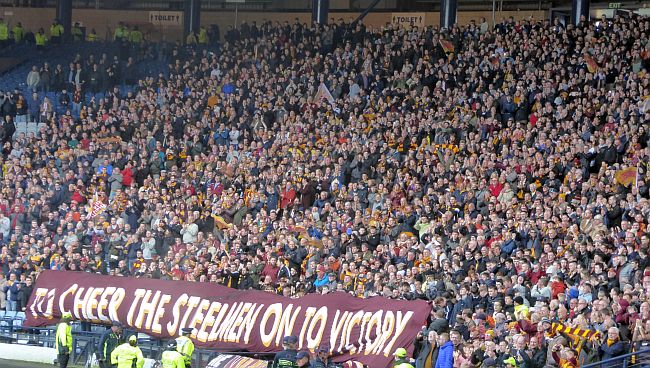 Many doubted that a top flight club could have anything other than a struggle to survive without a rich and benevolent backer.  The Well Society provides a steady stream of income from its 2,000 members but it is a modest contribution.  Sound management, excellent talent spotting and a regular supply of academy graduates has been mixed with a promising young manager to produce a team that has delivered more than normal expectations.

The brave gamble to resist undervalued offers for our best talent has paid big dividends but the fact remains that we have to sell players.  Some difficult choices will be presented in January.

The manager has often remarked that the players are quick to return to basics after a win and with games to come on Wednesday and Saturday the need is clear.  While there may be a few lingering hangovers in the crowd it is important that the team is able to maintain momentum in the league.