The absence of a Motherwell game this weekend has resulted in a fairly quiet week at Fir Park.  Off field activities have filled the void with ongoing speculation about the future of the manager filling column inches.

There is no doubt that Stephen Robinson will watch with more than his usual patriotic interest when Northern Ireland face the Netherlands and Germany in the next few days.  Qualification for next year’s Euro Championship, either directly of via a play-off, is possible and our man is widely touted as a contender to take charge following Michael O’Neill’s move to Stoke. 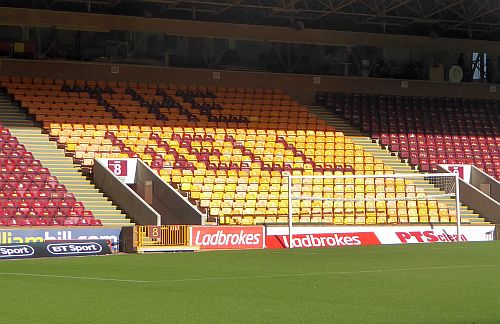 Stephen Craigan has joined the list of players and pundits who have been invited to comment on the NI job.  On BBC Sportsound Craggs said, “Stephen Robinson will certainly come into consideration”.

The vacancies at Hibs and Hearts give further rise to guesswork about Robinson’s future.  Anne Budge and Leeann Dempster are well aware of our manager’s track record and it is unlikely that the fairly modest reported compensation fee (around £120,000 – Daily Record) would be a barrier.

Alan Burrows, Jim McMahon and the rest of the Motherwell board have experience of the managerial merry-go-round and they will be well prepared whatever the outcome of the current speculation.

Meanwhile the commercial department at Fir Park has been busy promoting upcoming activities.

It seems that many ‘Well fans will find a bottle of Motherwell gin liqueur in their festive goody bags.  We have partnered with the Dundee Gin Company.

Ahead of the launch of the Hall of Fame later this month the club has revealed that James McFadden will join George Stevenson, Willie Pettigrew, Ally Maxwell in receiving the honour.  It will be interesting to see how this latest venture to pay tribute to former players compares to the list produced in 2007 (The Greatest Ever Motherwell Team).