Motherwell enter the latest international break with the feel good factor at Fir Park as high as it's been in years. We have a share of fifth place in the table and a semi-final to anticipate.  Happy days.

To beat Partick Thistle is perhaps not a wild surprise and even to do so in comfort is not the biggest shock Scottish football has ever seen.  But a Motherwell centre-back doing a Cruyff turn in the opposing penalty box to set up a goal is surely one of 'now I've really seen it all' moments for the season. 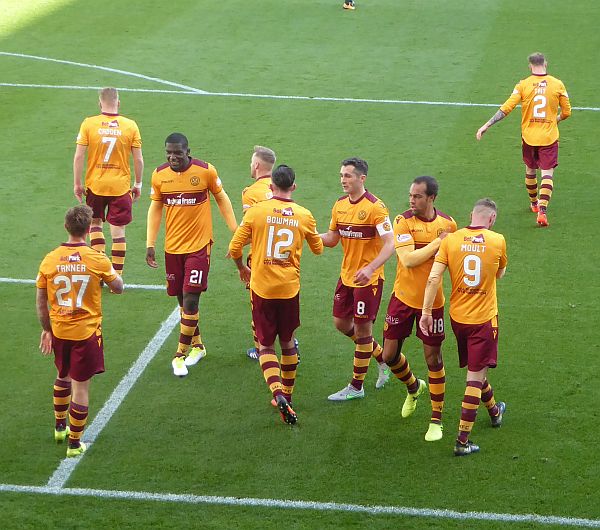 Tanner congratulated for his goal

An unblemished run in the Betfred Cup and 13 points from 8 league fixtures would always guarantee a contented support but there is more behind the smiles on this occasion.   Motherwell are playing with a style and enthusiasm that has not been seen for a few years.

Tremendous credit has to go to manager Stephen Robinson for our start to the campaign and the board will surely be contemplating extending his deal.  To offer improved contracts - for players or management - could risk upsetting the delicate balance in the dressing room but it is hard to say it would be undeserved.

And if we continue our current form into the League Cup semi-final, there will surely be enough bonus money for pay raises all round...