Lanarkshire eyes will be on Belfast on Thursday as Motherwell will face the winner of the Glentoran v Havnar Bóltfelag tie.

The Europa League will come to Fir Park on Thursday 27 August as the Mighty ‘Well enter the competition at the 1st Qualifying Round.  UEFA has ruled that all qualifying ties will be single-leg matches.

Glentoran are in the competition thanks to their success in the Irish Cup and the side from East Belfast are favourites to win the preliminary round tie.  They will be hoping that their summer signing Gael Bigirimana will earn them a trip to his former stomping ground.

HB Tórshavn were fourth in their league last season and currently sit at the top of the 2020 table after 17 games. They will not be short of goal scoring confidence having as they enjoyed an 11 (eleven) – 0 win last weekend. 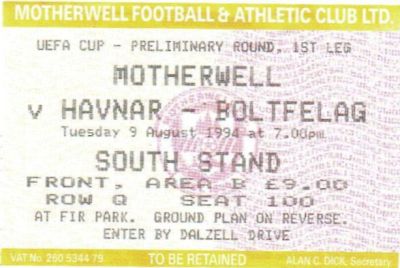 Motherwell met the Faroese side in 1994 in the early stage of the UEFA Cup.  A comfortable 7-1 aggregate saw us into the next round.

Motherwell have not yet made any announcement regarding the streaming of this Europa League match but the club advised prospective purchasers that free entry to the first tie would be included.  It may be that a TV broadcaster could bid for transmission rights.

The game between Glentoran and Havnar Bóltfelag will be available from 6pm on Thursday on the BBC NI Sport website.