Motherwell fail to do the Dons double

Aberdeen scrambled the only goal of a dour game at Fir Park to beat Motherwell 1-0 at a rain soaked Fir Park.  It was a disappointing afternoon with little football on show.

Defences were on top all afternoon and there were very few goalmouth incidents to whet the appetites of the 4,500 fans in attendance. 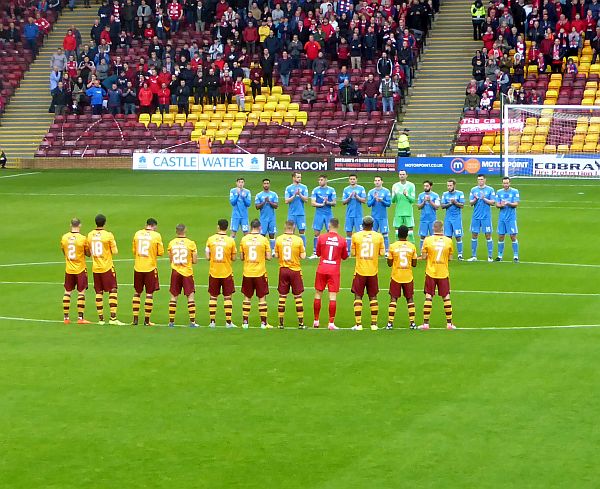 Dunne and Bigirimana were added to the starting eleven as Hammell and Rose made way.  There was a fitting tribute paid to the late Bert McCann before kick-off.

Kipré gave the home crowd an early scare when careless work on the touch line freed May but the striker pulled his effort across the face of goal.  Carson had to punch a cross to safety and Lewis admired a Moult long range shot as it flew high over the bar.   There was little else to report for the first 45 minutes.

The visitors took the lead when Considine bundled the ball into the net ten minutes into the second half.  He battled through a crowded penalty box and with the help of a flick from Christie found the goal at his mercy.

The goal signalled to McInnes that it was time to shut up shop.  The back line was bolstered with substitutes and they slowed the game down.  Motherwell pushed forward but met stubborn resistance.  High balls to our strikers rarely found their target.  The swap of Bowman for Fisher made no difference.

The game always looked like a ‘first goal the winner’ affair and so it transpired.  We fought hard but never approached the heights that won the cup tie only four days ago.

Aberdeen took the points today but we have a trip to Hampden to anticipate.  We’d probably have settled for that at the beginning of the week.