Motherwell give all for a win in Dundee

Motherwell gave their all for three points at Dens Park. Tanner scored the only goal after five minutes and we move up to third place in the league table.

It was a huge performance from the Motherwell players and it was no surprise to see several of them on their knees at the final whistle. We dominated the first half and should have enjoyed a bigger lead by the break. But the heroics on the Hampden pitch on Sunday took a toll and we tired badly as the game progressed. Sterling defence held off Dundee as they camped in our half for the last half hour.

Robinson freshened the starting eleven with four changes from the semi-final. Moult, Cadden, Rose and Campbell were rested and Bigirimana, Fisher, Tanner and Frear provided the fresh legs.

We took charge immediately and Fisher set up Tanner for a simple finish to calm any nerves. We dominated the game and found ways over, around and through the home side. It seemed that we must add a second but Bain did well to thwart our efforts.

Kipre hsd an outstanding game, especially in the second half, but he produced some magic footwork to earn a corner in the first. Frear sent the ball to Tanner at the angle of the box and his shot caused more panic. 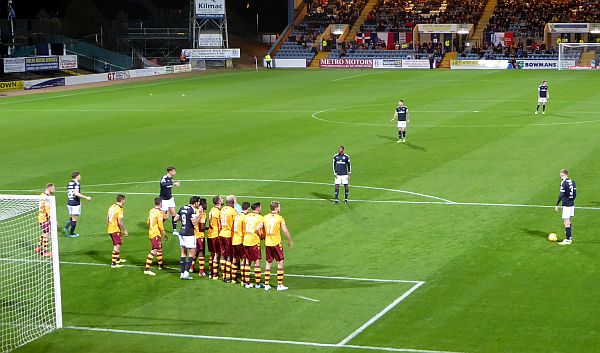 Dundee's best chance came in bizarre fashion in 35 minutes when McHugh passed the ball back toward his own box from around 30 yards. Hartley was on hand but he left it for Carson. The 'keeper lifted the ball but referee Finnie awarded an indirect free kick. Harley got booked for his protest but the chance was squandered. Carson made his first save in 43 minutes.

The game changed after the break and Dundee found an extra yard as they pushed for an equaliser. We found it increasingly difficult to get out of defensive mode and pressure began to mount on Carson's goal.

By the midpoint of the second half both teams had used all their substitutes but we remained under the cosh. Bigirimane had our best chance late on when he jinked by a couple of defenders to find only Bain to beat but a good save brought a sigh from the 400 Motherwell fans behind the goal.

The final whistle brough relief to the claret and amber contingent and the players responded to the standing ovation. The players gave everything for the cause and are due our grateful thanks.