Motherwell fans will travel to Ibrox on Saturday hoping that the game will be the first of several Scottish Cup ties.  We last reached the final in 2011 and Rangers will have to be eliminated if our interest in the competition is to continue. 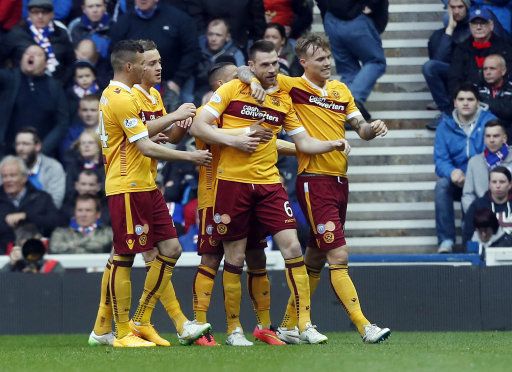 Another McManus goal will do nicely!

Some will remember with fondness the joy of the famous 5-2 win way back in 1961 but the Rangers team of 2017 is not of the same calibre as we faced in times gone by.  If McGhee's eleven take their best game to the field there is every reason to expect that Motherwell will be in the draw for the fifth round.

The Rangers squad has been enlarged in the transfer window notably with the arrival of Hyndman and Toral and both may be involved.  The expectation is that Wallace will have recovered from a hamstring injury and he'll be wearing the captain's armband.  Garner will be missing but Miller will keep their striking threat alive.

The away ticket allocation (2,000) will allow the biggest 'Well support in years to attend.  When we played at Ibrox in the May 2015 play-off game our allocation was  set at a controversial low of 950.  Memories of that day's triumphant 3-1 win are still fresh in mind and a similar result on Saturday will surely see a repeat of the scenes so well depicted in the viral Twist and Shout videos.

Mark McGhee has shown an ability to select the best formation and selection for key clashes and this is an occasion when he needs to get it right.  The three week break has given him a fully fit squad and plenty of time to plan.  A strategy flexible enough to cater for our strengths and to counter the threats posed by the opposition is needed.

We know of no distracting offers (yet!) for Moult or Cadden and if they and their colleagues are in the right frame of mind then a replay is the least we can expect. 1-1