Four goals without reply gave Motherwell an untroubled win over Morton at Fir Park.  Dunne, Cadden, Tait and Moult were the scorers on a wet and chilly afternoon.

An early header from Dunne gave us the perfect start.  The move started at the other end of the pitch when Carson got a touch to a Morton corner.  The ‘keeper followed the ball out beyond his box to force play upfield.  Tanner latched on to it but Gaston got a touch on his shot to concede a corner.  McHugh got a head to the set piece and our left back was on hand to loop the ball into the net. 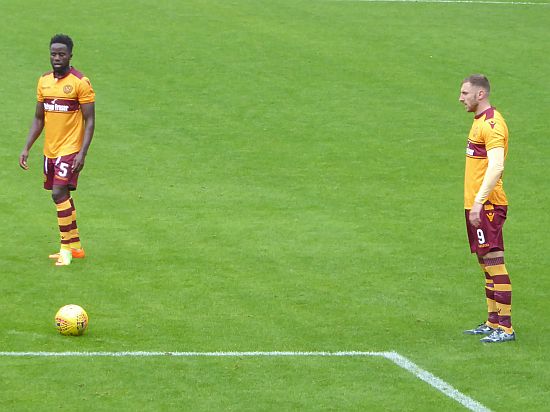 Guess where this end up!

McHugh produced a flying header but his effort cleared the bar.  Tanner set up Cadden for our second and the game was in the bag.  Any doubts about the outcome vanished five minutes before the break when Harkins made a dangerous, studs up lunge at Tanner.  Kevin Clancy produced the red card to reduce the visitors to ten men.

With space and time on the ball we bossed the second half and took a few pot shots.  Kipre and Bigirama produced powerful shots from distance but we had to wait until 67 minutes to see the third goal.  McHugh had tried an ambitious curler the beat the goalie before striking the junction of post and bar.  The rebound fell kindly for Tait and he rolled the ball into the net.

As the heavy rain continued to fall Moult made his entrance.  Only on the park for two minutes he grabbed the ball as we were awarded a free kick at the corner of the 18 yard box.  His delivery was a perfect whipped rocket just inside the near post.  He took the acclaim that followed.

We spurned a few simple chances to score a fifth but now command Group F.

There were many fine contributions.  Bigirimana seems like a natural.  He enjoys possession and can deliver a telling pass.  Cadden was full of running and in defence the partnership of Heneghan and Kipre looks good.  McHugh was awarded the man of the match award and Carson can claim his first competitive clean sheet.

Games against Edinburg City on Tuesday and Berwick Rangers on Saturday will complete the group.