Motherwell scrape past Edinburgh City to win the group

Motherwell struggled to defeat Edinburgh City but they win Group F. We had many chances to finish the game but after losing the lead late goals from Cadden and Frear ended the tie.

The majority of the credit has to go the the League 2 side as they defended stoutly and limited us to few clear cut chances. They had a deserved moment of glory when they took the lead with 20 minutes remaining but our persistence paid off. 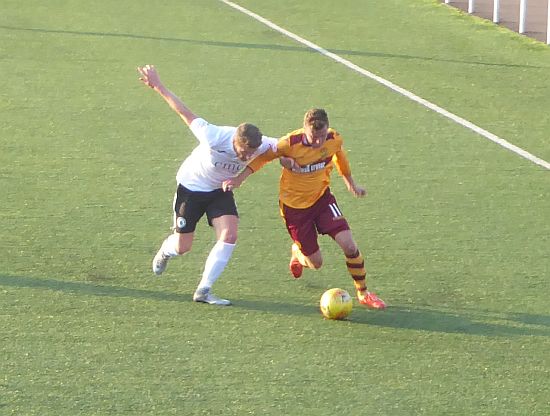 Frear on a first half run

Edinburgh City kicked off in the bright evening sunshine facing a much altered Motherwell side as the manager continued to get his squad fit for the start of the league season.

We almost broke the fastest goal in the world record as the home side delivered a short pass to their 'keeper. Bowman's misdirected touch saved their blushes asfter 5 seconds.

Fisher came close with a couple of headers courtesy of Frear's crosses. The right back, Harrison, knew he was in for a tough time.

Carson had little else to do but watch his shadow grow as the sun slowly set. At the other end we squandered the first corner after 25 minutes. Fisher spurned a great chance on the half hour when Bowman delivered from the left. He tried a glancing header rather than a more direct attempt that would have troubled Antell.

City produced an off-target drive to wake up Carson as most of the action continued with us trying to break through the ranks of white shirts.

Frear had a double chance to give us the lead before the break when he pounced on a slip by Caddow to run into the box along the dead ball line. He tried to pass into the net, got a rebound and hit the second attempt against the 'keeper. 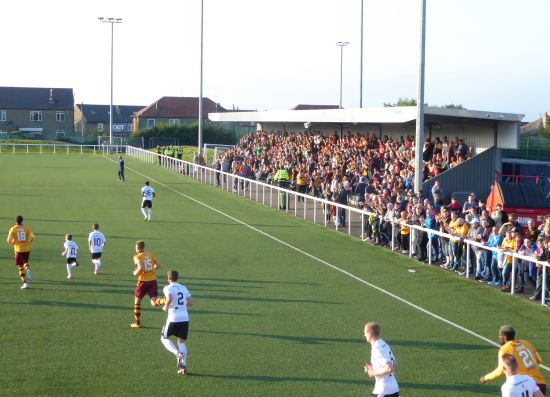 A number of Motherwell fans took advantage of the opportunity to change ends at the break and moved to the grass bank at the goal where they hoped to see some second half goals. They cheered as Stephen Robinson emerged from the changing room to cut short Cadden's half time kickabout. He was joined by Tanner as Bowman and MacLean made way.

Our number 7 made an immediate impact and he whipped in a low drive across the face of goal but there were no takers. Frear offered the threat on the other wing and the Antell's fingers would be stining after our man's fierce drive in 56 minutes.

Fisher gave the City 'kepper another chance to shine with a powerful heqader on target after a Cadden cross. A couple of corners followed but nothing came of them.

Then the unthinkable. With nine men in attack we succumbed when Grimes latched on to a long ball and with a cool head passed the ball into the corner of the net.  Rose was replaced by Bigirimana.

We were level after five minutes when Cadden was on hand at the far post to slam home and with only one minute of regulation time remaining Frear finished from close range to save an embarrassment.