Motherwell win by three against Linfield

Motherwell enjoyed a comfortable 3-0 win against Linfield at Windsor Park on Saturday.   Goals from Chris Long in the first half then Peter Hartley and Jake Carroll in the second ended the pre-season trip to Northern Ireland on a happy note.

The famous old stadium offered a perfect surface for the teams to hone their skills.  Stephen Robinson’s charges were content to hold and pass and to push forward when the opportunity arose.  It was Mark Gillespie’s turn for a game in goal but he had little to do other than to collect an occasional cross. 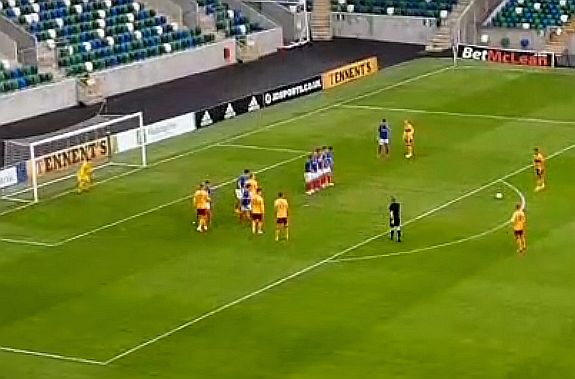 Jake Carroll plants this in the postage stamp corner

Linfield provided a Facebook stream of the game – many thanks.

After half an hour without either goalkeeper being tested we took the lead.  Long chased into the corner and forced the defender into a weak pass back.  Our man took his chance by breezing past the ‘keeper and firing low into the net from 10 yards.  The cheers of the small band of ‘Well fans echoed around the empty stands.

The second half was just two minutes old when we doubled the lead.  Liam Polworth sent in a tempting cross from the left and Peter Hartley made no mistake with his header.

We earned a couple of free kicks in dangerous positions.  The first came off the post but the second was a sublime chipped effort by Jake Carroll that caught the home ‘keeper cold.  We were 3-0 up and cruising with twenty minutes remaining.

The team will return home with the week’s training camp behind them.  Next up will be a trip to Raydale Park on Tuesday evening to face Gretna.