Motherwell travel down the Clyde on Tuesday for the third match in Group E of the Betfred Cup.  League One side Dumbarton have won one and lost two in this season’s competition and no doubt they hope for a midweek upset. 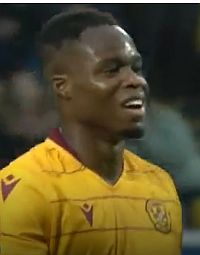 The Sons 1-0 win in Annan was more than wiped out by the 4-1 and 6-1 defeats at the hands of Morton and Queen of the South.  They have the experienced hand of Jim Duffy on the tiller and former Motherwell player Stuart Carswell in midfield.

Motherwell last visited Dumbarton on competitive business in January 1998.  The game ended 1-1 and an Owen Coyle goal was needed in the replay to allow us to progress in the Scottish Cup.

Stephen Robinson’s reconstructed squad has delivered two impressive performances as they took care of Championship sides Queen of the South and Morton.  The fast wing play of Sherwin Seedorf and Jermain Hylton provides plenty of goal scoring opportunities and both have found the net.  James Scott has been on the receiving end of their excellent service.

We have yet to concede a competitive goal and Mark Gillespie and his new defensive shield will be hoping to keep the shutters up as the group progresses.

The travelling support will anticipate a few claret and amber goals in the shadow of the rock.  Is a 4-0 win too much to expect?