Dundee come to Fir Park on Saturday for Motherwell’s second home game in 2017.  The visitors hold the advantage in this season’s matches but a ‘Well win would see honours even.

Motherwell have yet to score against the Dark Blues this campaign as a goalless meeting in August was followed by a 2-0 loss at Dens Park in November.  That last game included ‘the goal that never was’ and a reference to the Disciplinary Tribunal for Mark McGhee. 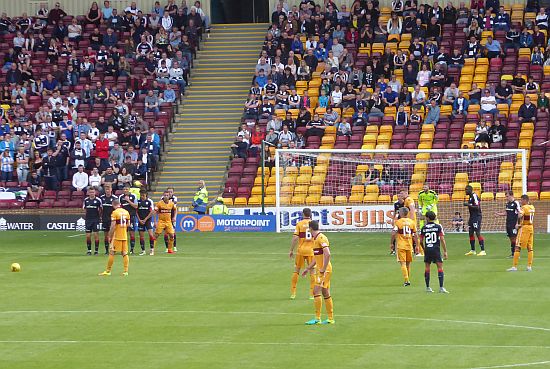 No goals in the last Dundee visit

We trail this weekend’s opponents by three points.  If hope of a top half finish is to remain a realistic possibility a win is needed.  Our three February losses came from teams in the top five, now we have to take points from those in the bottom seven starting with Dundee.

He squad is suspension free at last.  McHugh and Tait are now available and as Hammell and McManus were injured at Parkhead last week they are likely to join the starting eleven.  Jules was surprised to find himself involved for almost 90 minutes against Celtic and (one obvious error apart) he played well.  He could be paired with Heneghan at the heart of the defence.

Dundee will still be on a high following their win over Rangers last weekend but  their record away from home is not impressive (2W 2D 8L).

Two former Motherwell favourites will face us.  Hately and Ojamaa will be in the away changing room but they are entitled to a generous reception from the home stands.  Let’s hope they leave empty handed after a 2-1 home win.