Fir Park will open its gates to the 2017/18 season on Saturday when Motherwell and Morton meet in Group F of the Betfred Cup.  With a win already logged the favourites will be looking for another to cheer the home fans.

The old stadium has had a close season refresh with a new roof on the Hunter Stand complimenting the refurbished pitch.  New warm-up areas behind the goals complete the more obvious improvements. 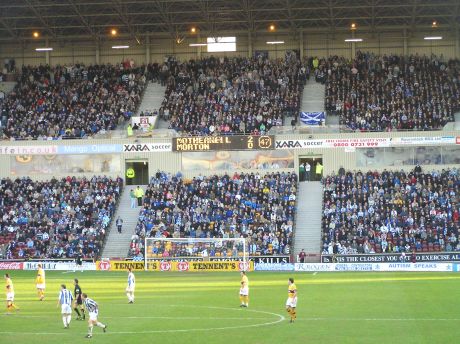 An impressive Morton crowd at Fir Park in 2007

Although the manager has seen his squad through four pre-season friendlies and one competitive tie he is still some way from knowing his best eleven.  It would not be a surprise to see some more experimentation on Saturday.

Bowman will feel he has done enough to merit a start following his brace at Hampden and with Moult still building fitness there may be a slot available if Robinson chooses to start with two up front.

Bigirimana has impressed in his first outings and the Fir Park crowd are likely to take to the midfielder.  He was one of five new starts to make their debuts against Queen's Park.

Morton needed two very late goals to force a penalty shootout against the Spiders in midweek.  Our former player Bob McHugh scored the first of those and he'll get a sympathetic welcome back to his old stomping ground.  Ross Forbes is another familiar face who will be in the visiting squad.

Season tickets are not valid for this match and gate prices are £12 for adults and £6 for concessions.  The referee will be Kevin Clancy.

A comfortable 3-0 win will send us home in good spirit.