This week, back in 2002, provided the stage for the most dramatic debut ever made in claret and amber.  David Ferrere, a half time substitute, scored a hat-trick as Motherwell crushed Hibs 4-0 at Fir Park.

The Frenchman's short spell with Motherwell began when Eric Black's previous connection with Metz resulted in the midfielder signing in February 2002 for a spell that ended with the administration cuts three months later.  Sadly, his spectacular contribution in his first game was followed by nine goalless appearances.

What follows is the FirParkCorner match report...... 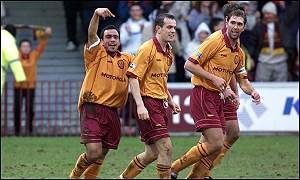 Have we found a new hero? David Ferrere, the 'wee Frenchman', scored three in his debut and had the Fir Park faithful cheering his every touch.

Yet it could have been so different if Scott Leitch had not succumbed to the knocks he took in the first half which caused him to stay in the dressing room at half time.  He had been off the pitch twice for treatment and it was no surprise when he failed to appear for the second forty five.

Ferrere's appearance transformed the game. The first half highlights amounted to three free kicks (two from Elliott coming close and one from Adams striking the post) and very little besides.

The home support suspected that Eric Black's French connections had bourne fruit a few minutes into Ferrere's debut. He lined up for a free kick some thirty yards from the Cooper Stand goal. Those of us facing him expected that he would pick out the twin targets of Strong and Ready who were lurking in the area. But no. He fired off a rocket which just shaved the junction of post and bar and the fans took note.

Better was to follow five minutes later.  Elliott ran on to a clearance from deep and squared low across the eighteen yard line.  David pick out his spot and fired into the corner.

Ten minutes passed and he bagged a second. Almost a replica of the first. Elliott again supplied the cross and on this occasion the pace of the shot beat Colgan as the ball slipped underneath the diving goalie,

Lehmann chipped in with a downward header to make the game safe.  Hibs were in disarray and despite a few flurries up the park rarely troubled Stevie Woods in our goal.

By this time, every 'Well attack was greeted with a roar of expectation from the home fans and their enthusiastic support was rewarded with ten minutes left to play.  Again Ferrere was presented with a chance from the same position and he made no mistake.  The celebrations which followed involved most of the 'Well team lifting the scorer, in turn, and the crowd enjoying the spectacle.

Ferrere must assume that defence is not a skill which is practised in the SPL.  He may find it a little harder to score at Ibrox next week!

Nevertheless, it was a smashing victory and everyone concerned with the club should enjoy the triumph.

After the match Eric Black, barely able to conceal his glee, said "I don't expect him to score three goals in every game!".

Were you there?  Have your say on the messageboard.