The manager and his squad are to be applauded for the positive manner they adopted at Ibrox.  With the exception of the never to be forgotten play-off game that was by far the best Motherwell performance in Govan for many years.

The chatter among the 'Well fans on the way out of stadium was that we should have won the game.  But for a couple of instinctive fast reaction saves from Foderingham we would have scored again. 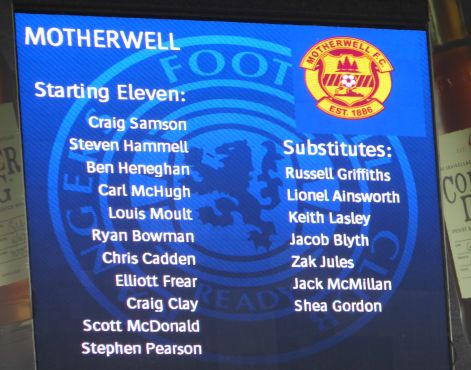 The manager pointed out that he would have grabbed a point, if offered, before kick-off but by the final whistle there was regret that we failed to take three.  He got his tactics right and the players made every effort to execute the plan.

When the team lines were released it was not obvious that we would play Hammell, Heneghan and McHugh as a three central defenders.  Cadden and Frear dropped back when required and they  covered miles on the Ibrox flanks.  Such was the energy expended by Cadden that he needed treatment for cramp in the closing minutes.

Bowman produced his best showing in claret and amber to date.  He provided welcome shelter for the ball and frustrated any blue shirt that tried to rob him from behind.  Moult's early header gave us a perfect start and he backed that up with his usual tireless contribution.

Samson, on his 32nd birthday, had almost nothing to do in the first half but he earned his wages with several good stops in the second period.  The men in the middle of the park snuffed out the opposition time and time again.  Loose balls were won and strong tackles were employed when needed.  Overall it was a great effort.

That brings us to the Wednesday meeting with Hamilton.  This is one Lanarkshire derby that has more at stake than simply bragging rights.  It is a relegation scrap and both teams will be desperate for the points.  If we come close to the standard set on Saturday there will be plenty to smile about.