Good times have arrived at Fir Park.  After a rocky spell at the year end Motherwell have changed style, found form and made progress up the table thanks to a five game winning streak.

St Mirren were the latest victims to fall before the young guns that have energised the support and drawn praise from all quarters.  Stephen Robinson had a broad smile on his face when he talked after Wednesday’s 2-1 win. 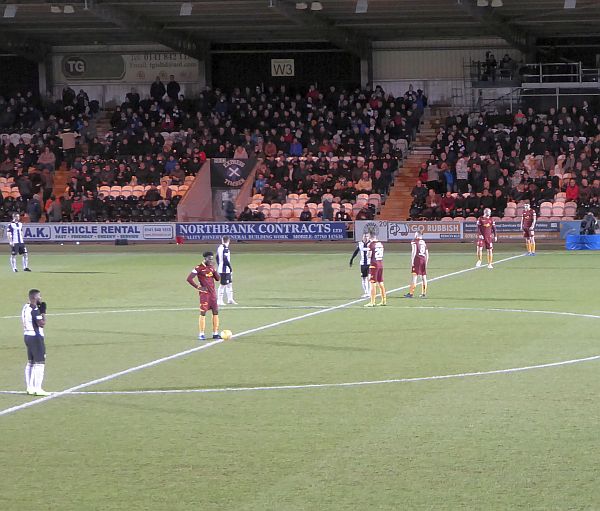 Let's all stand in a line

“We’re just delighted we got the result, it was a big game for us tonight.  Sometimes you can get complacent.  We knew this would be a hard scrap and so it was.”

Asked about the number of goals scored by emerging young players the manager said he was delighted but in truth he didn’t care who scored them.

Speaking of Jake Hastie he affirmed his belief that the loan system had paid dividends.  “The advantage he’s had is that he’s been out and played football.  He’s not coming from U20s or reserve football which is completely false.  The intensity and the pace are false. Jake has been playing real men’s football – we’re a real believer in that as a football club.”

“I’m not getting carried away. Three weeks ago we were a disaster when we lost to Ross County.  We were the worst team in the world and I was the worst manager in the world – we weren’t.  We’re progressing, we’re doing well, we’ve got young boys playing very well.”

The squad now have a free weekend thanks to our early cup exit but no one would suggest that the players have not earned a few days relaxation.

While much attention has been focussed on our rising stars it should be noted that our defence made a big contribution to our turnaround.  We have conceded only one goal in the last four games.  Elliot Frear, perhaps stung by the arrival of Gboly Ariyibi, played a huge part in the win in Paisley when he came on as a second half substitute.  His delivery to Allan Campbell for the winner was just one of the threats he delivered in his relatively short time on the pitch.

Motherwell fans can now look at the league table and talk realistically of an attempt to reach the top half of the table by the split.  St Johnstone lie above us but the margin is only four points.  They must feel us closing in.

Another Win for Motherwell, Five in a Row