Almost two months have passed since Chris Long scored at Tynecastle in what looks likely to be the last Motherwell outing of the season.

The vital point gained in that game kept Motherwell a point ahead of Aberdeen and secured squatting rights on third place.

In the following weeks interest in football has waned as other more important matters grab the headlines. The debate about the medium term future of the Scottish leagues continues to rumble on and there are few newsworthy matters to grab our attention. 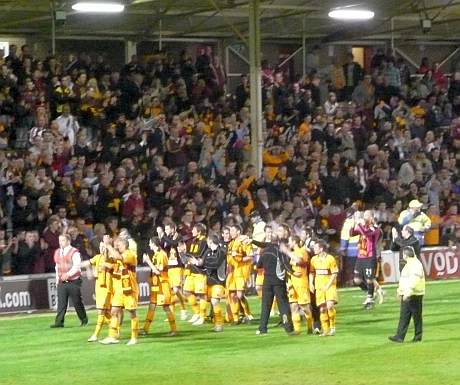 Fir Park is quiet with most of the staff and players now furloughed.  The occasional words from Jim McMahon together with some of the excellent work of the club’s community trust provide the basis of the club’s news releases.

An industry has grown up plundering the many anniversaries, both recent and historic, in Motherwell’s past.  (John Gahagan’s testimonial match against a Premier League Select took place on 6 May 1990)  Broadcasters have filled vacant gaps in their sporting schedules with recordings of significant matches from past years.

BBC Scotland delivered a treat with a re-run of the famous 6-6 game against Hibs and while that delivered an escape from the endless viewing of box sets it was no substitute for the live experience we used to enjoy from the stands.

There is a growing understanding that the world has changed and that the accommodation football has to make before a return is not yet clear.  Mike Mulraney, vice-president of the SFA chairman of Alloa, suggested in his interview on BBC Sportsound that clubs are war gaming various scenarios including one that has no spectators for the whole of next season.  That such an awful possibility is being considered should be seen as a reality check to those dreaming of a return in late summer.

Let’s hope that the video libraries have deep shelves.