A late goal from Elliot Frear gave Motherwell a 1-0 win over Berwick Rangers and a seeded place in the last sixteen of the Betfred Cup.  The winning margin hardly reflected the one-sided balance of play but justice was done in the end.

The visitors deserve credit for the stout defensive performance that forced Motherwell into a frantic closing spell as they sought the goal that guaranteed the important advantage in Sunday’s draw.  Frear, scorer of the winner against Edinburgh City in midweek was the easy choice of the sponsors for the Man of the Match award. 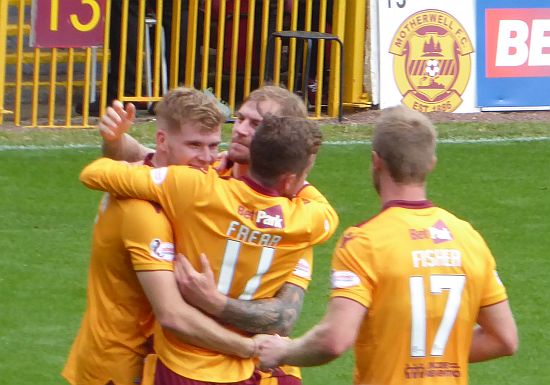 Yet the match winner might not have had his chance to shine had Hammell not broken down after five minutes.  Robinson selected a much changed starting eleven that included a first of the campaign for Moult.  Our talisman is still not up to full speed but he will have benefited for the full hour on the pitch.

There were few chances created in the first half.  Moult came close with a side-footed attempt from close range but McCrorie was up for the save.  A couple of headers landed on the roof of the net but the well marshalled back ten from Berwick held firm.

Moult pounced on a defensive slip five minutes into the second period and his powerful drove was pushed for a corner.  In a rare journey to our half Carson had to deal with a long range shot.

Frear and Cadden must have delivered dozens of crosses into the Berwick box but we were unable to profit (much as in the game against Edinburgh City).  Fisher replaced Moult and the pace picked up.  There was an increasing urgency in our play as the last half hour arrived and Fisher’s height was used to some effect.

Newell was thrown on for Tanner.  Dunne produced a goal-bound header from Frear’s corner but a defensive header cleared the danger on the line.

The breakthrough came in 82 minutes.  Cadden tried his luck from a narrow angle on the right and the ‘keeper was happy to parry the shot.  The ball fell to Frear some 13 yards out and his made sure that he found the target to seal the game.

Securing the seeded place in the knockout stage was the object of the exercise and we succeeded.  Still, it would be good to convert some of those tempting crosses into goals!