Motherwell failed to overturn the odds and lost the Betfred final to Celtic. Two second half goals, one following a much disputed penalty, ended our hopes and led to a 2-0 defeat.

We matched the opposition in the first half and with the help of some stout defending reached the break level. Forrest broke the deadlock in 49 minutes, we had a golden chance saved, then Sinclair crumbled under Kipre's challenge and we suffered the double blow of a penalty and a red card. Game over. 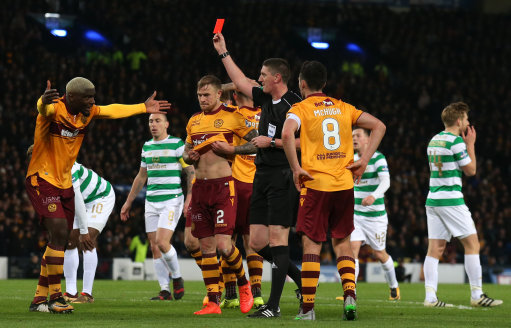 The team was met with a fine colourful display from the Motherwell fans behind Carson's goal. Robinson elected to field the same eleven as had won at Pittodrie and we used a similar formation. Four at the back, a diamond in midfield with two strikers.

After a cagey opening spell Celtic began to dominate possession and our back line embarked on a long concentrated period of work. Tait gave us a cheer after 25 minutes when he had a blast from 17 yards. Moult tested Gordon with a long range free kick but the stodgy first period ended with few saves from either 'keeper.

A careless loss of midfield possession cost us dear early in the second period. Forrest found space just outside the the box on the right side and placed a low drive to Carson's right. Tanner replaced Grimshaw and we set about the recovery.

Our best chance of the match followed. A tempting cross allowed Moult to fire a powerful header on target from 7 yards. Gordon produced a fantastic instinctive save as he raised an arm to prevent what seemed to be an equaliser. Moult then had a strong appeal for a penalty denied when it looked like he was fouled.

Unortunately a penalty decision was given when Kipre made the slightest of contact with Sinclair at the other end of the pitch. The forward took a further step before he hit the ground. TV replays suggest the decision was, at best, soft.

The game was over as a contest when Kipre was sent to the stand before Dembele scored the penalty.

It was only thanks to some poor finishing that we escaped further loss as Celtic used their advantage to spread the ball at will. We survived, and might have earned an equaliser when Moult's free kick struck the post.

The manager expressed his disappointment at the game turning decision but suggested that his boys held their heads high. He congratulated Celtic on their win.

Attention now has to turn to the second round of the triple header at Fir Park on Wednesday. Much will depend on the players' ability to recover from the huge effort they gave on the Hampden surface.

The team was given a standing ovation by the fans as a thanks for the entertainment they delivered in the League Cup run. Might we return in May to have a tilt at lifting the Scottish Cup?