Marvellous Motherwell completed a hat-trick of wins with a comfortable 2-0 triumph over Aberdeen at Fir Park.

The win puts Motherwell two points behind the league leaders and suggests that Graham Alexander’s rebuilt squad is fit for purpose.  Two fine headed goals from new signings Kevin Van Veen and Juhani Ojala, one in each half, delivered what ended as a stress free three points for the home support. 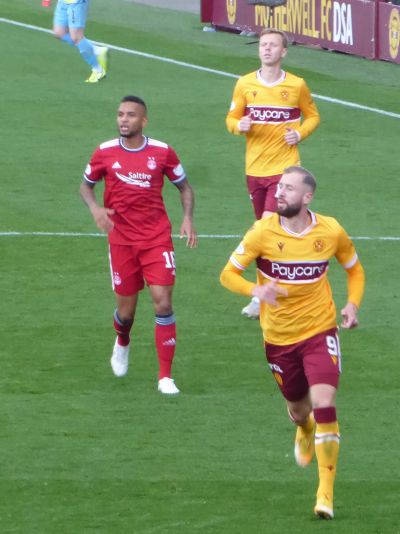 There was a debut for Sondre Solholm Johansen as a partner for Ojala in the centre of the back four.  The Norwegian elects to have his middle name on his shirt.  In the absence of Stephen O’Donnell, Bevis Mugabi pitched in at right back and Nathan McGinley replaced the suspended Jake Carroll at left back.

There was a contrast in styles evident for much of the opening spell as Aberdeen played the ball through midfield and, for the most part, Motherwell sought to target the three forwards.

The visitors were unable to convert any of the several half chances that came their way and any hope they had was thwarted by the fine goalkeeping skills of Liam Kelly.  Ojo failed to connect with a tempting cross then Kelly headed into Kelly’s arms from five yards.  They paid the penalty for slackness in attack. 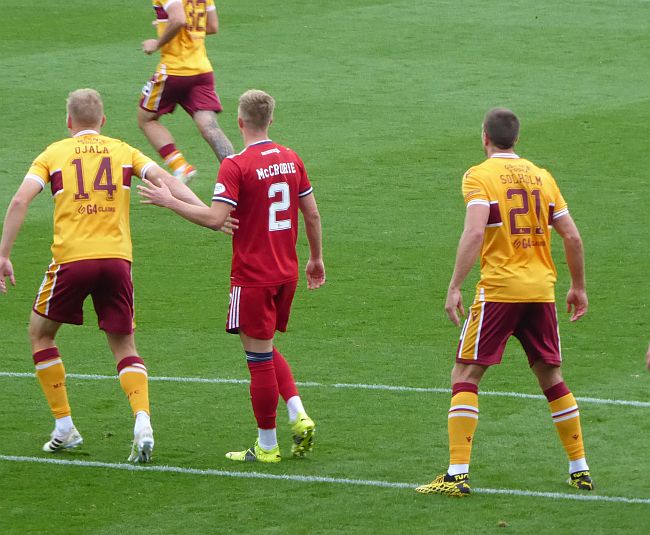 Kevin Van Veen showed Aberdeen how to finish as he powered a downward header into the net when he connected to Kaiyne Wooley’s cross from the left to deliver a fist half lead.

The new defensive partnership was rarely troubled and the manager was quick to praise the player’s work rate and discipline when the opposition were in possession.

The killer second goal arrived after an hour.  A midfield free kick found its way to Van Veen wide in the left and Ojala popped up at the far post to head home.  KVV was the sponsor’s man of the match and he almost found the net with an audacious lob that had Lewis happy to lift high.  Liam Grimshaw charged in and almost ran the ball into the net off his chest but it escaped in the ruck.

Aberdeen pushed for a consolation but sterling work from Kelly ensured that a back to back clean sheet was recorded.

In the manager’s words it was an excellent day for Motherwell.  Any ‘Well fan would have been delighted at the prospect of three wins, a draw and one loss from the opening five fixtures.  The league campaign has started well and the team will go to Ibrox next week with nothing to fear.