A comfortable win for the Mighty 'Well

The home team had the better of the first half but the visitors clinical finishing with goals from three different strikers delivered a comfortable victory.

Manager McGhee made three changes to the line-up for the last outing.The suspended Reynolds allowed 18 year old Shaun Hutchison to have a first team debut and the youngster made the best of his chance.He looked calm and confident and his big 6' 2" frame certainly gives him the look of a strong defender.Craigan returned to his familiar position and Klimpl was back in midfield.Lasley and Hammell had the day off.

Hamilton started brightly and Craigan had to clear off the line inside five minutes when McCarthy looked likely to score.We were pinned in our last third for long spells with only occasional breaks.Klimpl pinged a 20 yard effort wide of the post before we scored with our first effort on target in 24 minutes.Sheridan was the provider after he burst down the left wing. His tight-angled shot came off the keeper andClarkson was on hand to finish.

Accies pressed their case again and we had a couple of escapes before the break.Smith did well to block a fierce shot from close range and as the referee thought about blowing for the break Hutchison's goal line clearance kept our one goal advantage. 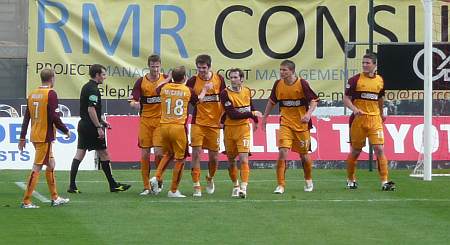 Three up and coasting

The half time team talk did the business and we were a different team after the break.A second goal arrived inside ten munites when Hughes fed Sheridan inside the box.The loanee beat the keeper and sealed the match.

Murphy, then Clarkson were removed from the action and McGarry and Sutton were introduced.Sutton got his name on the goal scorer's sheet following a short corner.Sheridan gave his striking partner the chance and he finished well from a tight angle.

Hamilton's lack of a finisher was their downfall but despite their 3-0 thumping from the Pride of Lanarkshire they retained their SPL status thanks to results elsewhere.Given that we have taken nine points from them this season, Motherwell fans should be happy to see them survive.