A great win for Motherwell in Inverness

We took the lead in the first half, conceded an equaliser in the second and scored the winner when it looked like we were struggling to hold on to a point.  Vigurs contribution was immense.

There was another shuffle of the line up as the manager freshened up the team.  Francis-Angol, Moore and Murray were moved to the bench to be replaced by Anier, Kerr and Leitch.  The Caledonian pitch was showing the expected winter wear and tear and the sprinklers had been hard at work before Inverness kicked off. 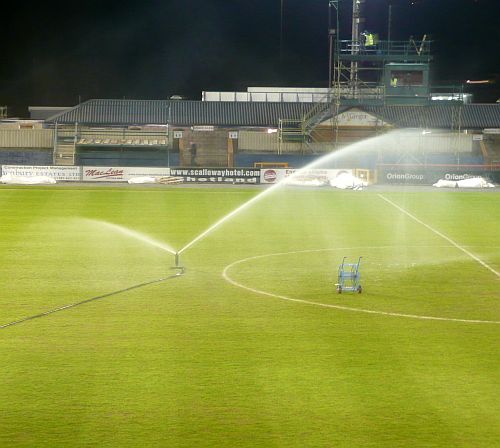 The changes resulted in Kerr at right back with Reid moving up to the wide diamond position. Vigurs was first to get noticed with the delivery of a decent free kick punched away by Esson then a shot on target from 20 yards.  Reid contributed with a fiery shot from 30 yards but the ‘keeper stopped it.

Without the guile of McFadden or the pace of Ainsworth it was little surprise that there was nothing resembling silky football on show.  The ball took plenty of punishment from both teams but to little effect.

Inevitably, we opened the scoring with what turned out to be a fine long ball down the centre from Kerr.  Anier got the touch despite the attentions of the central defenders and his low shot sneaked in at Esson’s right hand post.  As the fifty travellings fans entertained themselves watching the dancing fountains, the question they were asking  was...can we hold on to the lead?

Francis-Angol took to the field at the start of the second half leaving Reid in the shower.  It was more of the same with Vigurs stamping some authority on proceedings.  He had a chance from a well placed free kick but the ball flew high.  The home fans were getting increasingly restless and Hughes chose to bring on Christie for Polworth as they chased the game.

Tansey unleashed a blast from 27 yards that beat Nielsen and almost broke the post but we survived.  Moore replaced Anier with 25 minutes remaining.  ICT’s possession in our half paid off when Christie beat Nielsen from 25 yards with a low drive into the corner.  We were rare visitors to their half but a moment to brighten the game arrived as we entered the final ten minutes.  Hutchinson moved the ball forward and suddenly we had a break.  Moore and Vigurs were in control with only one defender tobeat.  They exchanged passes before Vigurs finished off the move with a his left footed pass into the net.

It was fitting that our man of the match should score the winner and we take second spot.