Motherwell came out on top after a hard fought game at Rugby Park.  Jake Carroll scored the only goal of the game with a free kick in the second half to move the Mighy ‘Well back into third place.

There were three changes to the Motherwell line up.  Mark O’Hara was given  his first start and he was joined by James Scott and Peter Hartley.  Bevis Mugabi, Liam Polworth and Devante Cole made way and were on the bench. 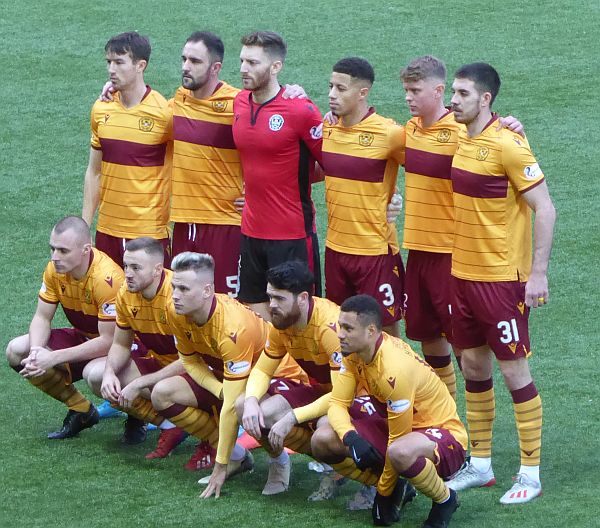 O’Hara got the game underway with the 758 travelling fans in the upper level behind Mark Gillespie.   The early exchanges had both teams eager to attack in numbers.  Liam Donnelly was first to try his luck with a thirty yard effort that sailed high into the stand behind Branescu’s goal.

Jermain Hylton’s first contribution almost led to the opener halfway through the first half.  He found space on the left and cut into the box to set up Allan Campbell.  The shot was deflected for a corner. A few minutes later James Scott delivered a cross from the right that was inches above Hyton’s head.

There were a few scares in our box but Gillespie was never under severe pressure.  Just before the break Donnelly limped off to be replaced by Liam Polworth.

We had the ball in the net five minutes into the second period but it was correctly rulled offside as Chris Long bundled the ball over the line after Hylton’s shot.  The winger was replaced by Sherwin Seedorf as we searched for a way to break the deadlock.

With 66 minutes on the clock we won a free kick in a central position just outside the ‘D’.  Jake Carroll sent it flying into the top left corner with the ‘keeper rooted.  The away support had a perfect view and rose as one to acclaim the screamer.

Chris Burke almost replied in kind but his dead ball was thirty yards out and Gillespie was happy to get a double fist in action.  We had an escape moments later when Stephen O’Donnell set up Eamonn Brophy with a clear sight of goal from twelve yards.  His effort flew high.

Killie pushed forward eager to salvage the game.  Gillespie produced an excellent save to thwart Brophy.  Devante Cole came on to offer fresh legs as Long was subbed.

Liam Polworth had a great chance to end the contest late on as he raced on to Scott’s pass but he hit the ‘keeper4 with his shot.

Gillespie produced another save in the last minutes of added time but the players were able to celebrate their win as the took the standing ovation from their fans.