A late comeback not enough as Hibs win after penalties

Motherwell lost to Hibs after a penalty shootout following a 2-2 draw at Easter Road in the quarter final of the Scottish Cup.

All looked lost when Hibs took a two goal lead after 80 minutes but a shot from Ricki Lamie and a header from Tony Watt forced extra time.  With no further goals penalties were taken and Hibs move into the semis after a 4-2 win from the spot.

Motherwell stuck with the same personnel and formation that beat Hamilton in midweek and prepared to frustrate the opposition.

There was no surprise gung-ho approach from Graham Alexander’s men as they settled into a defensive shell for almost all of the first half.  Hibs probed down both flanks and through the centre but the well marshalled backs protected Liam Kelly's goal.

There were a couple of incursions into the Hibs half and one of the very few shots on target came when Alan Campbell tested Macey from19 yards.

The scoring started in 51 minutes when McGinn's cross found Doidge in the middle of the penalty area.  The header flew into the net and forced a change of plans from the away dugout.

The goal produced a reaction and a quick equaliser almost arrived when an expansive Motherwell move ended with Devante Cole facing the ‘keeper.  The shot was deflected by Macey’s leg for a corner.

Tony Watt replaced Tyler Magloire and the chase continued.  What seemed like the telling goal arrived after some confusion the the Motherwell box and Irvine raised home spirits with a goal in 80 minutes.

In normal circumstances the travelling support may have started to drift to the exits but they would have missed a fighting comeback.  Following a corner from the right the ball fell to unmarked Lamie in the left of the box and he punted the ball into the ruck. It sailed into the corner untouched. 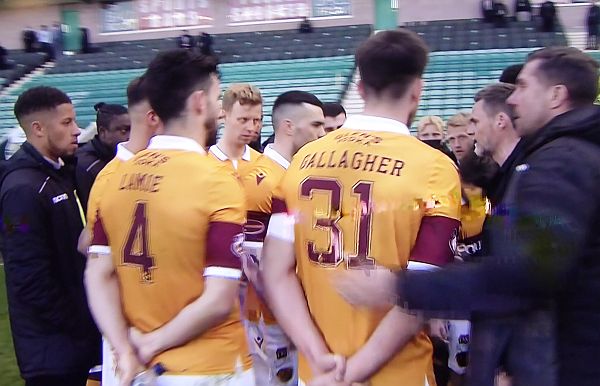 With two minutes of the ninety remaining Stephen O’Donnell crossed and found Tony Watt in the air and able to head home.

Extra time ensued and penalties followed.  Cole score but Mark O’Hara and Steven Lawless missed the target.  Nisbet’s fourth home penalty was saved by Kelly, Long scored for Motherwell but Porteus won the tie with a 4-2 margin on spot kicks.

Questions will be asked about our tactics.  It seemed that we started the game with penalties in mind and it the loss of a goal to put some fire in the belly.  Too late.

The cup run is over and with league safety assured so is the competitive element of the season.  Three league games remain as tests for the next campaign.