A late snatch robs 'Well of a win

A goal deep into added time robbed Motherwell of a couple of points as St Mirren snatched a point at Fir Park with a 1-1 draw.

It seemed that Motherwell’s patience had been rewarded when David Turnbull drove into the net with 15 minutes remaining.  But the final desperate assault at the end of additional time produced a fine equalising strike from Magennis. 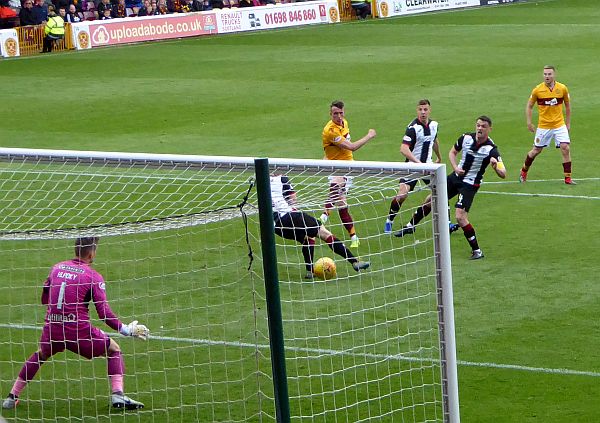 With Alex Rodriguez-Gorrin suspended Carl McHugh stepped in and filled the midfield vacancy.

The visitors, backed by an impressive crowd in the South Stand, kicked off and the pattern of the game was soon established.  Motherwell had the bulk of possession and set about breaking through the massed ranks of black and white defenders.

Gboly Ariyibi had the first chance with a shot on the turn then James Scott tested the ‘keeper from distance.  Liam Grimshaw blasted high from 30 yards.  There was little action in front of the Cooper goal as only occasional breakaways caused concern.

The game at times was pedestrian as we passed the ball around in search of an opening.  Elliott Frear replaced Grimshaw after the hour as Stephen Robinson tried to find a way around the defence.

Turnbull placed a free kick on Scott’s head but the striker lifted the ball over the bar.

The reward came in 74 minutes when the ball fell to Turnbull just inside the box.  His strike was true and gave Hladky no chance.  It seemed that we had won the game.

Jamie Sempple and then Adam Livingstone were fielded as the clock ticked on and the fourth official indicated three additional minutes.  St Mirren threw caution to the wind and they got the reward their play barely deserved when Magennis shot high into the net to bring the away fans to their feet.

The  late goal snatched seventh place from our grasp but we have another opportunity next week when we travel to McDiarmid park.