A narrow loss for Motherwell at Tynecastle

Motherwell lost the only goal of the game in the first half of an uninspiring afternoon at Tynecastle.  We had the better of the second period but were unable to create much of an attacking threat.

It was a scrappy affair with the ball in the air for much of the time as defenders hoofed high and midfielders exchanged looping headers.  There will be some frustration that our defence conceded another goal from a long throw. 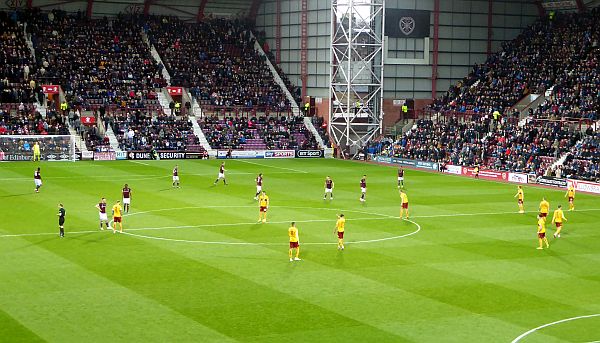 Motherwell kicked off with their backs to the travelling support in the Roseburn Stand and almost had instant success when Johnson’s low drive had Zlaman at full stretch but the ball passed the post on the wrong side.

Here were four changes from the midweek game.  Gone were Hartley, Campbell, Donnelly and Sammon.  Dunne, Rose, Main and Rodriguez-Gorin joined the line up.

Main had the ball in the net with a sublime floater into the top corner but Willie Collum chose to award a foul against our man.

We lost the lead following a long throw from Bozanic on our right.  Haring got a head to the ball and it reached the net off of Dunne.  The rest of the half was an even scrappy affair with few chances.  Gillespie was almost embarrassed when a deep cross forced the ‘keeper to palm away for a corner.

Most of the play in the second half was in the Hearts half of the pitch.  We earned a series of corners to keep pressure on the home defence but only a diving header wide of target from Dunne gave us a moment’s cheer.

The manager made three attacking substitutions as the half wore on; Bigirimana, Bowman and Scott replaced Rodriguez-Gorin, Rose and Tait.

The home defence was rarely troubled and we were unable to fashion a road through.

Back to the drawing board for the trip to Perth next week.