A red card and an outrageous deflection defeat Motherwell

A controversial red card and a wild deflection sent Motherwell to a 3-0 defeat against Hearts at the lunchtime game at Fir Park.

Mark McGhee raged at the dismissal of McHugh five minutes into the second half describing referee Dallas’ decision as ridiculous and shocking.  It was the turning point in what had been a poor affair with neither ‘keeper having much to do.  Hearts then took the lead with a fluke deflection and the contest was over. 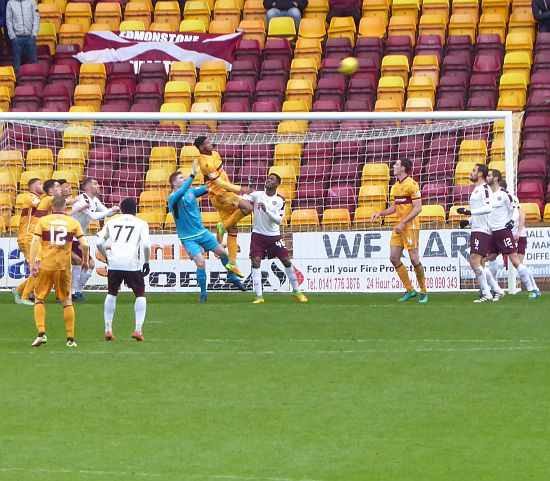 We started with a three at the back setup as Jules was given his home debut alongside McManus and Heneghan.  A scrappy opening included an injury to Tait and he had to be taken off.  McMillan replaced him after 17 minutes.

The best chances of the first period fell to Motherwell just before the break.  Hamilton flapped at a corner and Ainsworth then fired low on target.  With the ‘keeper beaten a goal-line clearance from Avlonitis was needed.  Moult let fly with a 22 yard free kick just wide of the target before the teams took stock after a goalless 45 minutes.

McHugh was given his marching orders after a challenge on Cowie.  The ball was taken but contact was made and the referee went to his top pocket.  Protests we waved away and we made changes as a result.  Pearson and Lucas replaced Ainsworth and Hammell.

Hearts pushed on and their good fortune arrived when a shot from Tziollis outside the box arched high off of Lasley.  Samson was a full stretch but the flight beat him and the ball sneaked in under the bar.

Motherwell remained in the game and came close to an equaliser when Pearson came close to connecting with Cadden’s cross.  Lasley was inches wide of Hamilton’s post with a 23 yard low drive.

We lost two more goals inside the final ten minutes, both to breakaways and both were taken well by Goncalves.