A win in Aberdeen returns Motherwell to second place

The goal, created after a 60 yard breakaway run from Anier, moves us above our European spot rivals and secures a third win bonus for our young stand-in ‘keeper.

Motherwell lined up with a couple of changes from the eleven that faced St Mirren last Saturday as Kerr and Lawson replaced McManus and Vigurs.

The Dons took the initiative and controlled most of the first half but some stout defending and a few good saves from Twardzik sent us to the break without loss.

Sutton suffered a cut to his head early on and after a change to a numberless shirt, left the play for five minutes for treatment.  Ironically, it was at that stage that we game into the game and a few half chances appeared.  Sutton was fed by a Lasley pass and he escaped Anderson's challenge to have an attempt at goal.  He slipped when taking the shot and then appealed for the spot kick. 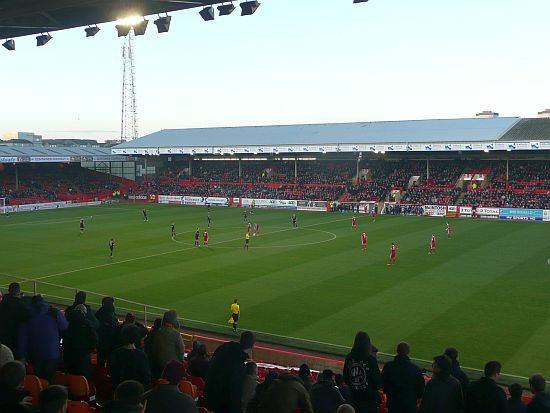 Lasley and Lawson had like Nguyen range strikes but Langfield coped.

At the other end Hayes missed a sitter of a header and just before half time McGinnis brought out an excellent close range block from Twardzik.

The winning goal followed an Aberdeen long throw-in .  It was cleared to Anier some ten yards inside his own half and he put his head down and charged toward the opposition’s box.  Ainsworth was on the right side of the pitch and made up ground to give his partner a simple pass inside the box to allow a side foot finish into the net.  There were around 150 ‘Well fans cheering the move as it developed and the rose as one when the goal was scored.

Aberdeen fought hard to equalise but our well organised defence restricted their opportunities. To our credit we were composed in possession and frustration grew in the red ranks as time ran out. We survived four added minutes at the end including a McGinn free kick that struck the side net.

The expression on the players’ faces at the end showed how much they valued the win.  The long journey home always seems shorter with three points in the bag!