Motherwell and St Johnstone shared the spoils at McDiarmid Park.  The home side scored in the first half and the visitors equalised in the second.

There was only one change to the Motherwell team and it saw the debut of Connor Shields as Tony Watt started on the bench. The visitors gave the black away strip a first outing. St Johnstone made five changes from the eleven that started in Istanbul on Thursday. 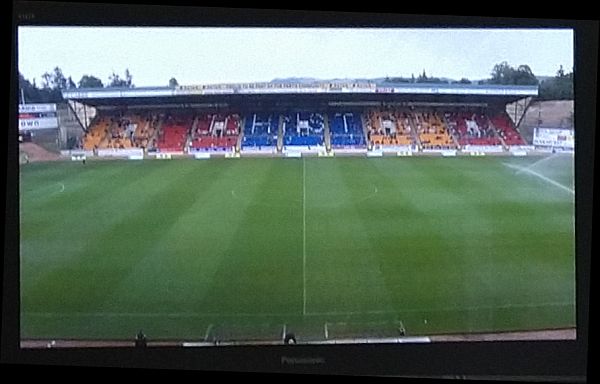 Callum Slattery fired Motherwell’s first attack with a ball that released Kaiyne Woolery on the right.  He found Kevin Van Veen’s run into the box and Clark had to produce a fine stop low at the corner.

At the other end Liam Kelly put Liam Donnelly in trouble as he released a ball from hand.  The ball was lost and Bevis Mugabi ended the threat with a fine goal saving block.

Woolery must have though he had scored when he directed a header, following Slattery’s corner, that seemed certain to find the ’keeper’s right corner but Clark produced another excellent save.

The hosts came into the game more after the midpoint of the opening half and took the lead in 33 minutes.  Wotherspoon drove a cross from the left and when neither Woolery of Lamie made a connection with the ball it hit Stephen O’Donnell at the back post and fell into the net.

The sparse home support wasKvv has a able to enjoy the interval with a one goal lead.

KVV had an early chance for an equaliser but his 25 yard free kick flew high over the bar.

A bettor chance followed when Jake Carroll launched a throw into the box with Mugabi the target.  The defender’s looping back header beat the ‘keeper but hit the far post.  The rebound gave Van Veen an instant to shoot from close range but the ball was held by Clark.

Motherwell pushed forward when the opportunity arose but there were few chances as the rain soaked the surface.  It was clear that changes were needed and it was no surprise to see Tony Watt come for Shields then Steven Lawless for Donnelly.

The substitutions paid off big time with ten minutes remaining. Watt finished off a lovely move that he started just outside the centre circle.  He made progress and passed to Lawless on his right.  The forward run continued and Watt was reunited with the ball to fire home from seven yards.

The scorer almost snatched the game a minute later when O’Donnell’s floated cross gave our hero a chance to volley but the effort was off target.

Both managers will probably agree that a draw was a fair result.

Next up for Motherwell is a trip to Dens Park on League Cup duty next Saturday.