Another dire defeat for Motherwell

Motherwell lost 2-1 to St Johnstone after another poor display.  The winless run is now eleven and hopes of a top six finish diminish.

Kevin Van Veen’s early goal was cancelled after ten minutes with a Callum Hendry header. A turgid second half looked like delivering a draw until Hendry won the game with a superb strike in added time.

Once again the travelling fans were left frustrated at the feckless and unstructured Motherwell performance that relied almost exclusively on hopeful long range punts. 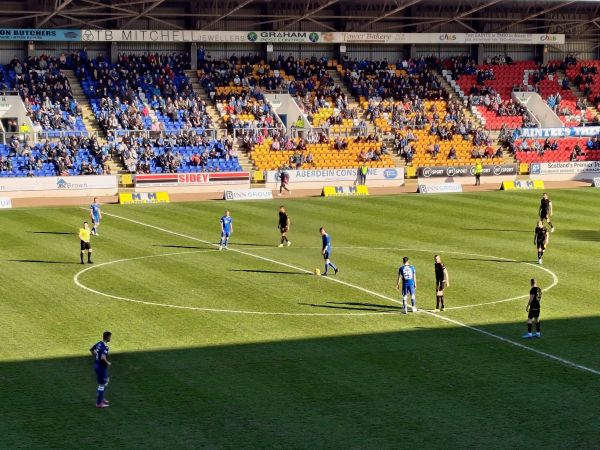 After the usual opening exchanges Van Veen collected the ball five yards from the left touchline and drifted into a central position.  From 25 yards he fired low to Zander Clark’s right and the ball found the net.  The goal offered hope that Motherwell might break free of the mid-table pack but St Johnstone soon replied.

Hallberg crossed from the right and Hendrie rose without opposition to head beyond Liam Kelly.

The home side were not shy of heavy tackles and three of their number were booked before the break.  Cleary was lucky that the referee failed to flash a red card following his arm smash into the back of Van Veen’s head.  To compound his error the Motherwell striker was also booked.

The second half produced 45 minutes of awful football.  St Johnstone edged possession but there was little entertainment on show.  Graham Alexander’s reluctance to shuffle his pack drew increased cat calls from the fans and with fifteen minutes remaining Kaiyne Woolery’s appearance produced a cheer.  The winger livened proceedings and following a  ‘Well breakaway he fluffed a chance to shoot and managed to earned a booking for a needless dive.

Three added minutes were indicated before Hendry produced a goal fit to win the game.  From the left side of the box he half-volleyed up and over Kelly to give his side all three points.

The international break has arrived and the manager has a fortnight to dream up a plan to beat St Mirren at Fir Park.