Another win for 'Well in Dundee

Motherwell fought hard to take three points from Dens Park with Craig Tanner winning the game after a first half tap-in. It was a poor spectacle but the 300 away fans left the ground smiling.

Campbell and Kipré returned to duty as Rose and Frear moved to the bench. Motherwell kicked off under blue skies and bright sunshine despite the near freezing temperature. 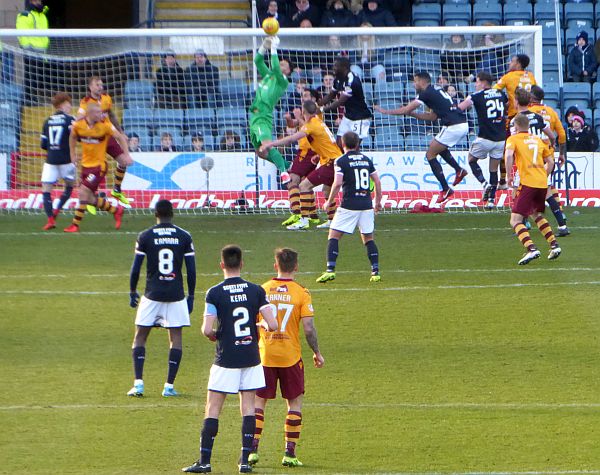 Carson had a busy second half

There was little to note in the first half other than Tanner's fourth goal against Dundee this season. It followed Dundee's best (and only) chance in the first period. Deacon's corner gave Moussa a near post flick that narrowly missed the far post and Carson quickly dispatched the ball down the right wing.

Main collected and managed to trundle the ball square across thebox. Tanner will never have an easier goal. He was in plenty of space as the home defence was missing and side-footed into the net. That completed the action as the Dundee support spent more energy heckling Ciftci that in support of their team.

Ciftci rose to the crowd and was booked early in the second half and caused Robinson to replace him with Bowman.

There was hardly any action in the second period anywhere near the Dundee goal. The home side pinned us back for long spells and corners, free kicks and crossed ball poured into our box.

Meekings came close with a header but our defenders withstood the barrage. Kipre and Aldred were backed up with the remainning claret and amber jerseys and we frequently had all eleven in our box.

Time and time again the Dark Blues piled in and it seemed inevetable that we would concede. But time ran out for the home side and we were able to claim another victory over Dundee.