Some nil-nil draws are enthralling, entertaining affairs.  This was not one.  Mothewell and St Johnstone offered little in Perth.

With one eye on next week’s semi-final Stephen Robinson made three changes to our starting eleven.  Out went Hendrie, Cadden and Campbell to make room for Grimshaw, Bigirimana and 18 year old central defender Barry Maguire who made his debut for the first team. 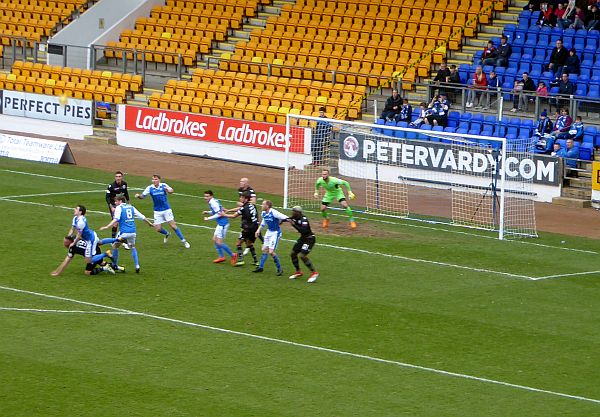 The youngster could not have hoped for a more comfortable introduction to the top level as the first half action was mainly confined to the space between the penalty boxes.  What little came his way caused no problem.

All twenty two players stuck to their tasks but there was nothing to interest the football purist.  Main had a couple of half-hearted efforts and Carson had to cover MacLean as he gathered a cross at the far post.  Davidson sent the teams to hear their respective managers at the break with a 19 yard drive and in keeping with the rest of the game his shot was off target.

The Motherwell support housed in the main stand level with the St Johnstone penalty area gave Maguire a hearty cheer when he popped p in front of them to display some neat footwork in support of his forwards.  Main was next to meet with their approval when he evaded his marker and let loose a curling effort beyond the post.

The home side upped the pace and caused us some discomfort.  The manager with a double substitution on the hour.  Frear and Main made way for Newell and Cadden.  Ten minutes later Rose replaced Maguire and joined Kipre in Willie Collum’s book after 90 seconds.  McHugh filled the gap in the back line.

Bigirimana whipped in a 25 yard free kick that had Mannus scrambling. We earned a corner but to no great surprise, nothing came of it.  Our best chance of a sneaky victory followed a deep cross from Bigirimana.  Grimshaw was on the end of it but his close range shot blocked.

All our attention now turns to next week’s visit to Hampden.  We’ll have to step up a gear or two.